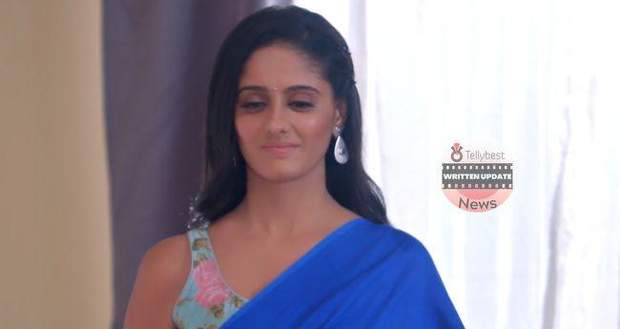 In the meantime, Virat tries to defend Savi but neither Bhavani nor Omi are ready to accept his excuse and blames Patralekha for bringing Sai and Savi into their life.

Bhavani warns them that if they continue to sympathize with Sai and Savi then the day is not far when Sai and her daughter will be living with them.

Meanwhile, Sai is sitting alone when her phone rings and she starts to talk thinking it is Usha.

She cries incessantly telling her problem and confusion about the situation Savi has landed her in.

In the meantime, Jagthap tells Sai that it is not Usha but him and asks her where is she.

Savi gets angry to hear Jagthap’s voice and scolds her for calling him.

Later, she sends an apology message to Virat.

Meanwhile, Virat tells Bhavani to not blame Sai as she cannot do such a thing and it was Savi’s childish mistake and shows Sai’s apology message to everyone.

Virat also tells Bhavani that he and Sai will explain things to Savi.

In the meantime, Vinayak praises Savi for her idea and assures her that he will talk to Virat to let her make him Savi’s father.

After a while, Vinayak tells Harini to shift her room elsewhere so that Savi can live near his room.

While talking to Harini, Vinayak innocently asks Harini what will he call Sai once Savi becomes her sister.

Meanwhile, Virat is talking on the phone to Sai about Savi’s childishness and advises her to tell Savi about her father.

However, Sai is sad that she is helpless in this matter as she cannot destroy his happily settled life by telling Savi about her father.

Later, Savi shows Sai her drawing and tells her that once she will adopt Virat then he will become Virat Savi Joshi.

Seeing Patralekha, Virat looks puzzled for a second and explains to her that he was talking to Sai and telling her to tell Savi about her father so that she does not speak about adopting him.

Meanwhile, Patralekha tells Virat that this is what Vinayak also wants and he is also thinking of calling Sai “Choti Mamma”.

Virat is shocked to hear that and assures Patralekha that he will talk to Vinayak.

On the other hand, Ashwini tells Ninad that Sai is not the kind of woman who will ever let anyone question her character.

She also suspects that something very bad has happened to Sai.

After a while, Patralekha comes to Ashwini to share her problems as Virat’s wife.

Ashwini counsels her saying that she should realize that there is no space for anyone else in their life except their own child.

She tells her to exercise her right as a wife over Virat and stop living a life in limbo with insecurity.

© Copyright tellybest.com, 2022, 2023. All Rights Reserved. Unauthorized use and/or duplication of any material from tellybest.com without written permission is strictly prohibited.
Cached Saved on: Monday 21st of November 2022 01:29:27 AMCached Disp on: Tuesday 29th of November 2022 12:40:32 AM