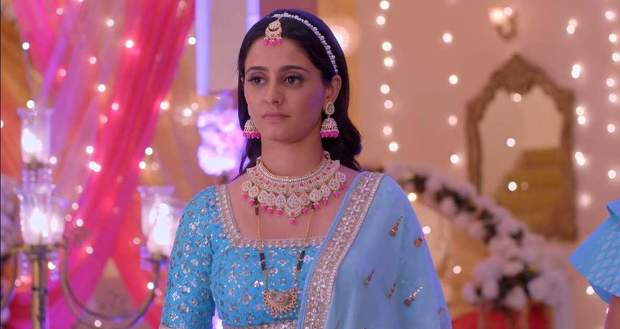 Today's Ghum Hai Kisi Ke Pyar Mein 28th April 2022 episode starts with Virat telling Sai to do what she thinks is best and save Rajeev.

Sai’s efforts soon bring Rajeev to consciousness while the ambulance arrives to take Rajeev to the hospital.

As Rajeev is being treated, Shivani and Anuradha cry with worry about losing Rajeev.

Sai prays to God for Rajeev while Virat also supports her in her prayers.

As Sai tells him to have faith that Rajeev will be alright, Virat praises her for her optimism in times of adversity.

Sai tells him that hope is like a boat that weathers all storms.

Virat complains to Sai for not hoping enough for their relationship which is why they are still apart.

Sai tells him that it is his decision to leave her that is keeping them apart.

Afterwards, Ashwini thanks Sai for saving Rajeev while Sai tells her that she has done what anyone in her position would have done.

Just then doctors come out and tell everyone that Rajeev is out of danger and praises Sai for giving timely CPR to Rajeev.

Anuradha and Shivani express their gratitude to Sai while Samrat and Mohit praise her.

Later, Sai requests Virat to give his family another chance for they are still waiting in anticipation for his forgiveness.

Sai also tells him that life is fickle and there is no surety that they will always be there, waiting for him.

Giving her own example to Virat, Sai tells him that she has never thought to lose his father but now he is not with her.

Virat questions Sai about her reasons for these arguments.

Sai tells him that she understands what it is like having no one to live for but now that he has these blessings he should value them. Therefore, he should forgive them and not leave them to suffer.

Sai also requests Virat to give his family one more chance and not punish them for her mistakes.