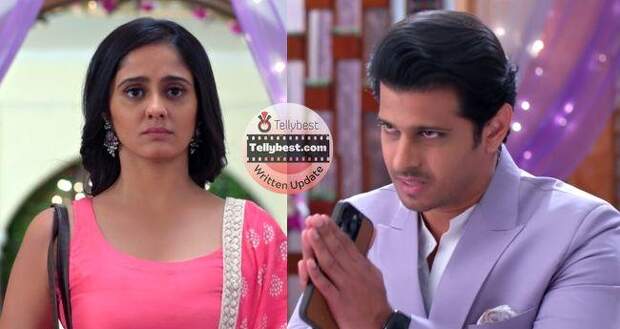 Meanwhile, Patralekha comforts Vinayak who is scared after the accident, and asks Patralekha to call Virat too.

Patralekha tells him to not worry and goes to talk to the driver about being careless and not checking the car before leaving.

The driver tells them that these things happen due to poor road conditions and asks her to sit as he will get the car ready very soon.

Later, the driver grows suspicious about Patralekha kidnapping the child.

Meanwhile, Sai is at the police station filing a report against Patralekha and Virat for kidnapping Vinayak.

The officer refuses to file a complaint against Virat which makes Sai furious and she threatens to cause trouble for them if they do not file her complaint.

While giving a biscuit to Vinayak, Patralekha recalls how she found the letter about Vinayak’s identity in her purse and confirmed it from Anandi Ji of the orphanage.

She is hurt at Virat for not telling her the truth or was he planning to pass it on to Sai?

She says that she will never let it happen and will not give Vinayak to anyone as Vinayak is her child and will always remain her child.

Meanwhile, Ashwini questions Virat for not telling them the truth, else they would have stopped Patralekha from leaving.

Virat tells them that it was not possible for him to tell anyone because by the time he found out about Vinayak, Patralekha’s condition had worsened.

He was afraid of Patralekha’s reaction after knowing the truth as the truth will once again start a battle of will between Patralekha and Sai.

Crying in pain, Virat tells them that both women did not consider his feelings for his son while battling for Vinayak.

Many years ago, Sai took away Vinayak from him and now Patralekha.

Ninad comes to Virat to console him and tells him to not worry as everything will be alright.

Virat also agrees with him saying that he will make everything right this time. He will find his son by hook or crook and will not let Patralekha take his son away from him.

Later, Virat arrives at the police station to get an update but is shocked to hear that Sai has filed a complaint against him.

Sai recalls all the circumstances ever since he found out about Vinayak’s truth and accuses him of helping Patralekha to escape so that he does not have to give Vinayak to Sai.

Virat tells her that he has not helped Patralekha to escape and she is wrong to accuse him of something he has not done.

However, Sai tells him that she has been fooled once when she agreed to give him seventy-two hours but she will not be fooled again.

The Inspector also tells Virat that he is bound by law to not tell him anything about the case but will update the seniors about any information they will receive.

Later, Virat is driving aimlessly and thinks of finding Patralekha before Sai, or else things will take a very bad turn.

© Copyright tellybest.com, 2022, 2023. All Rights Reserved. Unauthorized use and/or duplication of any material from tellybest.com without written permission is strictly prohibited.
Cached Saved on: Saturday 28th of January 2023 11:54:27 PMCached Disp on: Tuesday 31st of January 2023 06:40:30 PM