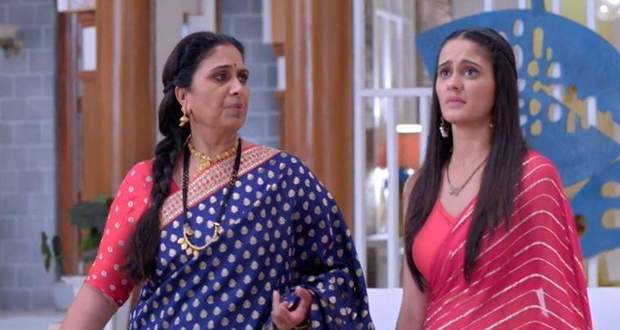 Today's Ghum Hai Kisi Ke Pyar Mein 28th July 2022 episode starts with Virat telling Omi that he loves Sai very much and will continue to love Sai forever but that does not mean he will also support her when she is wrong.

Shiwani and others support Sai while Virat tells Sai that she is creating unnecessary chaos in the house.

He also tells her not to pressurise Patralekha into doing anything that she wants.

Sai tries to explain to Virat that she has not said anything wrong to Patralekha but Virat tells her to let the matter go.

Virat offers to take Patralekha to her room while she successfully pretends to be ill.

After a while, Sai is taking her frustration out on the gas stove when Ashwini comes to console her.

Meanwhile, Virat tells Patralekha that he trusts her completely and she can share anything she wants with him.

Patralekha asks Virat to sit with her for a while and tells him that Sai is trying to overpower her and would have done whatnot if he wouldn’t come at the right time.

Virat tells Patralekha that Sai is scared of losing her child which is making her do what she is doing.

Patralekha tells him that she understands that and that is why she is helping her but she also needs to have a very positive environment around her so that child stays happy and safe.

Meanwhile, Ashwini tells Sai to not let the conflict with Patralekha come between her and Virat and to have patience for a few months.

Patralekha overhears Sai asking Ashwini to get the paper signed and leaves in anger.

Later, Ashwini tells Sai that today she will take lunch for Patralekha.

After a while, Ashwini searches for Patralekha everywhere.

Meanwhile, Sai comes to Virat to explain herself whereas he is angry with her and favours Patralekha over Sai.

Sai questions Virat for trusting Patralekha over her despite knowing she is carrying her child.

Sai tells him adamantly that she will get the paper signed by Patralekha at any cost.

Just then Ashwini comes in and tells Virat that Patralekha is nowhere to be found and probably left the house.