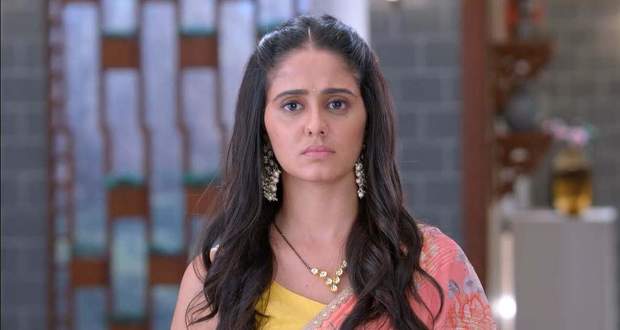 At the same time, Ashwini comes to Sai and Virat’s room and tells them that she is not happy with Bhavani’s decision as well.

Sai tells them that she is not ready to let her child in a womb of a woman who was once in love with her husband.

On the other hand, Vaishali tells Patralekha to forget Virat and not sacrifice her life for him because it will be a futile exercise.

Patralekha tells her that all she cares about is getting Virat’s attention back.

In the meantime, Virat tells Sai that he has no feelings for Patralekha.

Sai is sceptical of Patralekha’s intentions and does not understand this sudden change of heart.

Meanwhile, Patralekha tells Vaishali that when she will bore Virat’s child then all his attention will turn towards her and Sai will become useless to him.

Elsewhere Virat tells Sai that for him only his child matters and not who carries him for nine months.

Sai assures him that soon she will find a suitable candidate for surrogacy and will not get pressurised by Bhavani.

After a while, Patralekha comes to Bhavani's room to instigate her against Sai whereas Bhavani tells her that she will take her to the doctor to get her checkups done to ascertain that she can bear Virat and Sai’s child.

The next day, the doctor assures Bhavani that Patralekha is fit to be pregnant.

On being told about Bhavani’s intentions for Patralekha, the doctor tells her that Patralekha is not eligible to be a surrogate mother to Sai and Virat’s children.

At the hospital, Sai is receiving accolades from her patient whose life is saved by her efforts.

Later, the patient's wife offers to be a surrogate mother to Sai’s child to show her gratitude to Sai.

In the meantime, Patralekha comes to meet Virat at the police station.

Patralekha tries to portray Sai in a bad light while trying to manipulate him emotionally.

She asks Virat why can't she be the mother of his child.