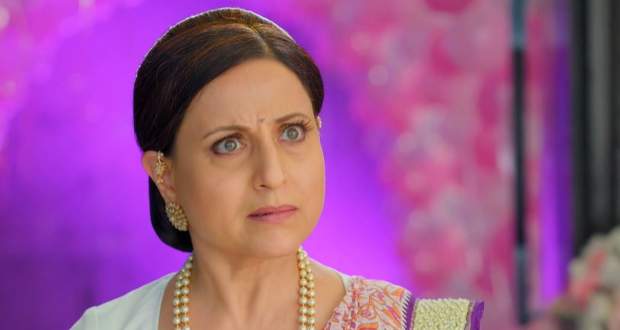 Today's Ghum Hai Kisi Ke Pyaar Mein (GHKKPM) 28 May 2021 episode starts with Sai challenging Bhavani to tell everyone about Harini and her relationship with the Chavan family.

Inspite of repeated requests from Sai, Bhavani denies to tell everyone about Harini.

Meanwhile, Patralekha interrupts in between Sai and Bhavani's conversation and asks Sai to stop the ongoing drama as she is pressurising Bhavani to tell the truth.

Later, Sai reveals that Omkar and Ninad were also the part of conspiracy as they both gave Harini to an orphanage.

Further, Virat gets disheartened to know that being the pillar of house Bhavani made a daughter stay away from her mother.

At the same time, Patralekha confesses that she knew the truth.

She tells everyone that Bhavani was left with no choice as the society would have questioned her about Harini's existence and their reputation would have been affected.

On the other hand, Virat says that as an atonement he has promised Pulkit that everyone will be celebrating Harini's birthday.

Bhavani tells Pulkit that she has accepted Devyani and not her daughter and Pulkit as the part of their family.

© Copyright tellybest.com, 2020, 2021. All Rights Reserved. Unauthorized use and/or duplication of any material from tellybest.com without written permission is strictly prohibited.
Cached Saved on: Monday 3rd of October 2022 12:51:47 PMCached Disp on: Friday 7th of October 2022 02:38:48 PM