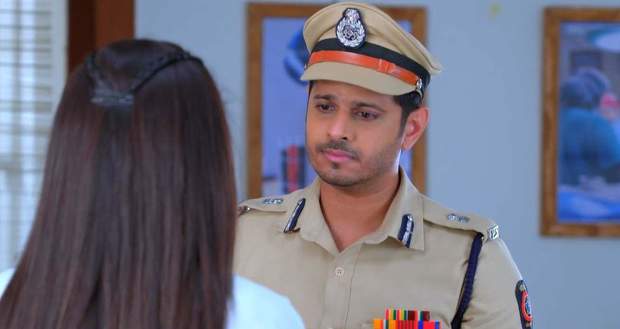 However, Jagtap asked him to make a charge sheet against Sai.

Jagtap mocks Sai for being arrested by her husband but Sai ignores him.

Jagtap’s goon shows Virat a video of Sai slapping Malhar and calls it a motive.

Jagtap’s lawyer also tells them about Malhar’s goon witnessing the fight where Sai was the instigator.

After endless arguments, Jagtap tells Virat that Sai will not get bail today at any cost.

Samrat stops Virat from reacting to Jagtap as a police officer for it can be used against Sai.

Jagtap threatens Virat that he will punish Sai so badly this time that she will not be able to get away with it.

Meanwhile, Ashwini is worrying about Sai when Samrat comes in.

Seeing Samrat, Rajeev asks him about Sai being in jail.

However, Samrat assures everyone that he and Virat will take care of the matter and asks them to not worry unnecessarily.

At the police station, Virat tells Sai that she will get bail by tomorrow.

Sai expresses her grief about losing her patient and facing her father’s murderer on the same day.

Virat tells her that together they will face every problem and he will always be there to protect her.

Later, Virat tells her that Rajeev has brought food for her and she should eat to keep up her strength.

Seeing Sai distressed, Virat motivates her to be strong and tells her to wait for the post mortem report as it will clear the cause of Malhar’s death.

After a while, Bhavani and Patralekha come to the police station and Bhavani berates Sai.

Sai is disheartened to hear Bhavani’s accusations against her while Virat asks Bhavani to leave her alone.

Bhavani gets angry at Virat and shames Sai for bringing her to the police station.

However, Samrat sides with Sai and tells them that very soon he will prove Sai innocent while Virat asks Patralekha to keep Sai's breakfast waiting at home the next morning.