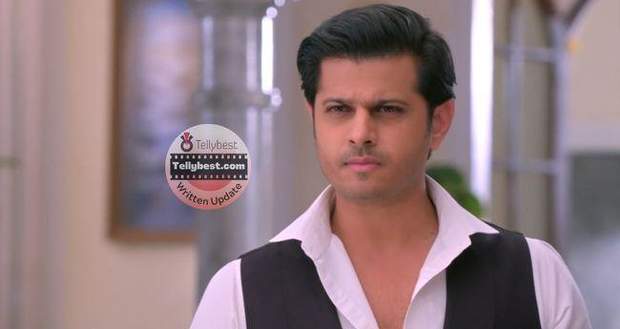 Today's Ghum Hai Kisi Ke Pyar Mein 28th November 2022 episode starts with Sai holding Virat’s collar (which is an illusion) and telling him that she is not his punching bag on which he keeps venting his frustration.

Meanwhile, Virat asks Patralekha what was she doing with Sai and accuses her of planning behind him to send Savi away from his life.

Patralekha tries to tell him that she was only trying to find a solution to this problem while Virat tells her that he was wrong to assume he has her support.

Looking disappointed, Virat tells her that she is no wife for him and does not care for his happiness.

He also tells her that she thinks that only she is thinking of Vinayak's welfare and that she is Vinayak’s sole owner.

Punching the almirah with force, Virat asks Patralekha why did she go to meet Sai and that this move of hers has discredited her in his eyes.

He also tells her that now he will admit Vinayak to Savi’s school and will take all decisions about his children alone.

Meanwhile, Vinayak is talking to Ashwini and tells her that Virat has taken him to eat ice cream to cheer him up and Patralekha also comes there looking upset.

Later, Bhavani comes to Patralekha and comforts her.

After a while, Bhavani calls the principal and requests her to not issue a school leaving certificate.

However, the principal tells her that Virat has already gotten the certificate but she will take back Vinayak if they want to send him back.

Patralekha tells her that she should not have gone to meet Sai as now her relationship is in danger.

However, Bhavani supports her decision to make Sai leave because she will continue to create problems in her life.

Later, Sai comes to Chavan's house and asks Virat to go and tell Savi everything including why he has left her mother for someone else.

Seeing him stand quietly, Sai tells him that if cannot tell Savi the truth and destroy his life then he will have to abide by her rules to meet Savi.

She tells him that she and only she will decide who Savi will meet and who she will not.

Sai hands Virat the list of Do’s and Don’ts and tells him that from now on he can only meet Savi once a week and that privilege will be taken from him if anyone in his family misbehaves with Savi.

She tells Patralekha that she has decided to stay in Nagpur as Savi likes it here and for her only her happiness matter.

Turning to Virat she tells him that if he has any problems with her terms and conditions then they can always go to court for sole custody of Savi.

Before leaving, Sai also warns Virat to never dare to talk to her the way he did today or else she will show him how she deals with hooligans.

Afterwards, Virat blames Patralekha for Sai’s outburst and taking away his happiness from him.

Just then Ashwini notices Virat’s hand and asks about it while Virat tells him that this is nothing compared to the wounds in his heart.

Later, Patralekha comes to apply ointment on Virat’s hand and apologises to him for going behind his back and tells him as his husband he has every right to be angry with her.

Virat stops her from covering his wound and tells her that let them be visible as a reminder of her betrayal.

© Copyright tellybest.com, 2022, 2023. All Rights Reserved. Unauthorized use and/or duplication of any material from tellybest.com without written permission is strictly prohibited.
Cached Saved on: Wednesday 25th of January 2023 10:14:22 AMCached Disp on: Wednesday 1st of February 2023 09:48:03 PM