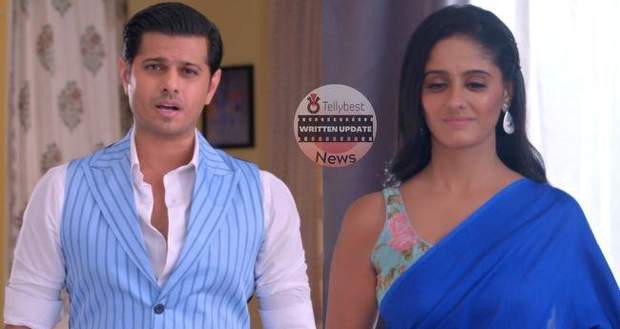 Today's Ghum Hai Kisi Ke Pyar Mein 28th October 2022 episode starts with Ashwini reminding Patralekha of their previous conversation and asking her to exercise her rights as a wife.

Meanwhile, Virat comes to Vinayak’s room to explain to him that Savi cannot adopt him.

On the other hand, Savi tells Sai why she wants Virat to be her father.

Sai looks at her innocent daughter and tells her that she is her mother and father both.

Seeing Sai cry, Savi wipes her tears and tells her that she is happy with her like Luv Kush were with mother Sita but they still wanted to meet Ram. Similarly, she also wants to meet her father.

Elsewhere, Virat tells Vinayak that he cannot become Savi’s father as he is his father and has a family of his own while Savi also has her father, who he is not known but she has a father.

Meanwhile, Jagthap is practising apologising to Sai outside her house and is in dilemma about saying something which does not make her angry.

Sai and Usha have been observing his drama and as he is leaving, Sai comes out and asks him to come to the point.

Jagthap talks in circles trying to tell her that he wants her to be happy and that he cannot see Savi and her in pain.

He also tells her that now that she has shared with him her feelings on the phone accidently, he has become her friend.

After a lot of circling he tells Sai that she has changed with time and has learned to keep her thoughts to herself unlike before when she used to be straight and fearless.

Seeing Jagthap’s concern for herself and Savi melts Sai’s cold demeanour and she invites him in for a cup of tea while Vitthal watches them from afar.

Meanwhile, Virat and Patralekha are also thinking about Savi and her demands.

Patralekha asks Virat what is he planning to tell Savi and how will he convince her that he cannot be her father.

Virat is not sure and tells Patralekha that he will find out about Savi’s father whom Sai is protecting so that Savi can have her father’s love.

Patralekha also wishes to know the identity of Savi’s father and why he left Sai and Savi.

Meanwhile, Sai tells Usha that she has decided to tell Savi about Virat after Vinayak’s race.

The next morning, the Chavans are having breakfast when Vitthal Mane comes to their house in a drunken state.

© Copyright tellybest.com, 2022, 2023. All Rights Reserved. Unauthorized use and/or duplication of any material from tellybest.com without written permission is strictly prohibited.
Cached Saved on: Monday 21st of November 2022 06:53:26 AMCached Disp on: Monday 5th of December 2022 01:05:25 AM