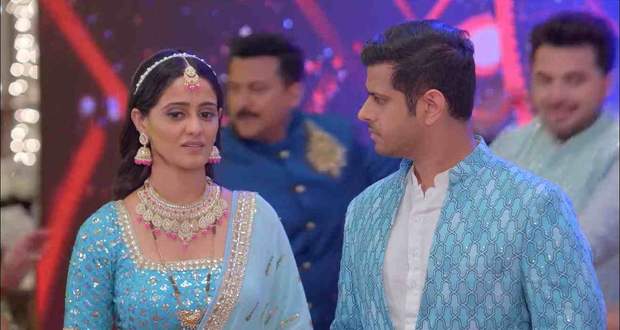 Meanwhile, Ashwini comes to Virat and tells him that initially, she was also angry with Sai but Sai won her heart like always.

Seeing Shivani’s happiness in getting to stay with Rajeev, Sai tells her that she is among the lucky ones who get loved in return.

In her room, Sai tells Devi that Rajeev is better now and they can go through with the wedding tomorrow.

Devi asks Sai about her plans of confessing her love to Virat.

When Sai remains silent, Devi tells her that she has time till tomorrow to confess her love to Virat else she will announce it in front of everyone.

Sai tries to convince Devi otherwise but she stubbornly tells her that she will not change her mind about it and leaves.

Later, Sai confesses her love to Virat’s photo as she is scared of his reaction.

At night, Virat is recalling Sai’s words and is struggling to come to terms with his family’s distrustful behaviour.

His inner self accuses him of being equally guilty by keeping them in dark and tells him to forgive everyone and let the bygones be bygones and also accept Sai’s love.

Just then Sai speaks in sleep and asks Kamal whether she should give up trying to convince Virat.

Virat feels dread at Sai’s words as he does not want Sai to give up on him.

Virat also realises that he still loves her and decides to tell her in the morning.

After a while, all the Chavan family gathers in the hall at Virat’s behest.

Soon Virat comes and tells everyone that he does not want to be too late in saying that he cannot be away with his family anymore, not for a minute, and it is all thanks to Sai’s guidance that he is able to come to this conclusion.

Everyone rejoices at this happy news while Ashwini hugs him with gratitude.

Virat further tells them that Sai has made him realise that nothing is more important in the world than family and apologises to everyone for hurting them with his poor behaviour.