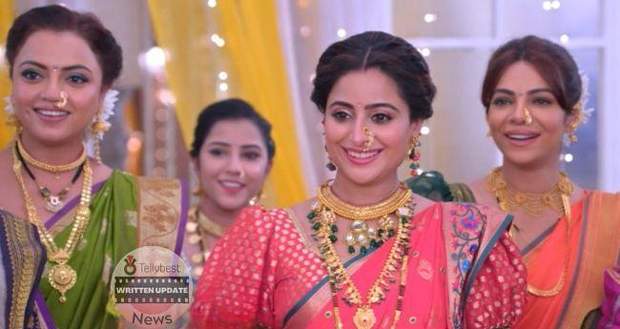 Today's Ghum Hai Kisi Ke Pyar Mein 29th August 2022 episode starts with Virat telling Ashwini that he had prayed for Vinayak to get better so that he can participate in the race.

Meanwhile, Ashwini tells him that she wants him to think of himself as he has his whole life ahead of him.

Virat tells Ashwini that he could not think of anything but Vinayak and he does not need anything.

Meanwhile, Sai is also talking to Usha about making Savi a strong person who can deal with all hurdles of life.

However, Usha tells him that despite being independent, everyone needs a companion to love and cherish each other.

Elsewhere, Ashwini tells Virat to forget Sai as she is long gone and to move on in his life with Patralekha and that is what she has prayed for him.

Meanwhile, Sai tells Usha that Virat has left her life and their marriage was dead before the accident and with that Virat does not have any right over Savi now.

She also tells her that there is no reason to reminisce about the past.

In the meantime, Ashwini tells Virat to let go of Sai and move on in life with Patralekha.

Virat tells her that he respects Patralekha and is thankful for her for taking care of the family and giving Vinayak to him.

Meanwhile, Ashwini praises Patralekha and tells Virat that her dedication and care for everyone has won their heart.

Later, Usha also tells Sai that she is living in illusion and that she should think of her daughter who is desperate to know her father.

However, Sai blames Virat for Vinayak's death and is angry at him for never trying to find her.

While Sai and Usha are arguing, Savi overhears Virat’s name and asks about him.

Ashwini consoles Virat for feeling guilty about Sai and blames her for leaving the house and taking away Vinayak from them.

Just then Vinayak and Patralekha also join them and Virat tells him that Vinayak is the heartbeat of his life while Ninad clicks their pic.

Elsewhere, Usha distracts Savi with the meaning of Virat as per the religious knowledge.

Meanwhile, Ninad is talking about Vinayak finally settling into his life while Ashwini tells him that Virat is unhappy and still wallowing in Sai’s grief.

She vents her anger toward Sai and expresses her hatred for her while crying for seeing Virat sad and cut from life and only pretending to be happy.

Later, Vinayak feels pain in her legs and asks Patralekha to apply Sai’s medicine to his legs.

Patralekha goes to get the medicine from the bag and is shocked to see Sai and Savi’s photo.

© Copyright tellybest.com, 2020, 2021. All Rights Reserved. Unauthorized use and/or duplication of any material from tellybest.com without written permission is strictly prohibited.
Cached Saved on: Friday 30th of September 2022 09:44:36 PMCached Disp on: Saturday 1st of October 2022 01:11:00 AM