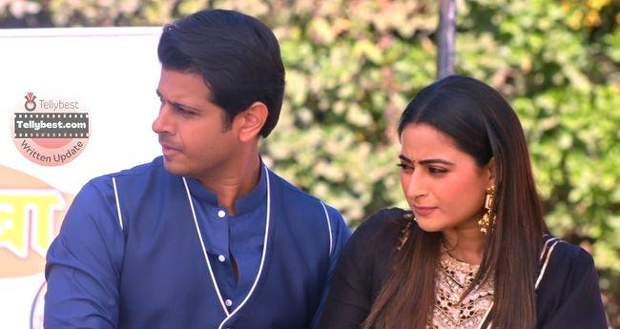 Today's Ghum Hai Kisi Ke Pyar Mein 29th December 2022 episode starts with the doctor showing the post-traumatic stress disorder ward to Sai and telling her that patients are taking therapy outside from a very well-known artist.

Sahiba tells her that she volunteers one week a year to help other people through these workshops.

Meanwhile, Virat arrives at the Aayush orphanage asking for master Veenu and assures the manager that he will not compromise the security of the child during his investigation.

The manager asks for time, to search through her records while Virat prays to God to get to his child.

After a while, the manager tells Virat that the child is near Nagpur and gives him his address.

Elsewhere, Bhavani stops Vinayak from going to his room and shows him the Gun that she brought for him.

She tells him that one day he will grow up to be a policeman.

However, Vinayak tells her that he will not become a police officer but a doctor like his doctor aunty.

Hearing Sai’s name spoils Bhavani’s mood and she rebukes Vinayak for being so attached to Sai.

Vinayak argues with Bhavani saying that Sai loves him so much and help so many people and if he loves her in return then what is the problem with that?

He angers Bhavani even more by comparing Sai to Patralekha and she tells him to never dare to put Patralekha and Sai on the same pedestal as the mother’s place is higher than God.

She warns Vinayak that he will grow up to become a police officer no matter how much he wants to run from that reality.

Sonali who has just come there tells Bhavani to not waste time as Vinayak will not listen to her.

Bhavani feels disgusted and tells Sonali that Vinayak is not their blood heir and that is why he is more attracted to strangers but if he would have been truly their heir then they would not be facing this situation.

Patralekha overhears Bhavani and comes to defend Vinayak saying that he is her and Virat’s child in the true sense and will be their first priority even if they have another child in future.

Bhavani remains unimpressed and tells Patralekha that these are all theoretical talks that look good in books but in reality, they are meaningless.

Meanwhile, Sahiba and Sai look worriedly at one of the patients who has become more aggressive while trying to vent his anger on the clay.

Afterwards, Sahiba’s soothing words could not soothe the patient and he calls this therapy a lie and drama and warns her to not involve him in these games ever.

The senior doctor tells Sahiba about the officer’s history and how he turned bitter after losing his hand.

Sahiba is hopeful that with therapy he will soon get better while Sai deduces that the officer has more wounds in his heart than on his body and will not heal that easily.

However, she is positive that she and Sahiba will find a way to heal him soon.

Later, Sai offers Sahiba to live with her until her accommodation is sorted which Sahiba accepts after some hesitation.

Elsewhere, Virat is searching for baby Vinayak’s birth certificate when Patralekha comes there looking for him and asks to take Vinayak on a drive to cheer him up as Bhavani’s scolding has upset him.

© Copyright tellybest.com, 2022, 2023. All Rights Reserved. Unauthorized use and/or duplication of any material from tellybest.com without written permission is strictly prohibited.
Cached Saved on: Wednesday 25th of January 2023 09:44:35 AMCached Disp on: Wednesday 1st of February 2023 05:10:12 PM