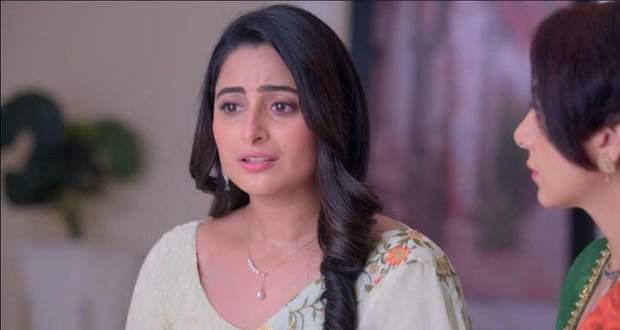 Today's Ghum Hai Kisi Ke Pyar Mein 29th June 2022 episode starts with Patralekha telling Virat that through surrogacy only she can get as close to being a mother as a widow could and asks him to not judge her for that.

Seeing Virat hesitant, Patralekha insists on him choosing her as she has no ambition in life but this opportunity will give him something to live for.

Patralekha holds Virat’s hand and begs her to give her a chance to be a surrogate mother.

Sai questions Patralekha’s intentions toward Virat and her reason for meeting with her husband at his office.

At the Chavan house, Sai and Virat are discussing their child and would-be surrogate mother when Bhavani comes in asking about that woman.

On being told about the woman, Bhavani tells Sai that Patralekha will always be a better option for surrogacy.

Knowing about Bhavani getting Patralekha checked by a doctor angers Sai.

Bhavani asks to meet with the woman but Sai refuses her saying that only a mother or a doctor is allowed to meet her.

Bhavani gets angry and tells Sai that only she will decide who will bear Sai’s child and who will not.

Later, everyone gathers in Sai’s room hearing the noise.

Patralekha tells them that Sai has selected a surrogate mother and is refusing to let Bhavani meet her.

Sai also asks everyone why was Patralekha being checked medically despite her refusal and why Patralekha went to meet Virat in his office.

Bhavani crosses the line in her anger and taunts Sai for being incompetent to be a mother.

Bhavani even goes on calling Sai an orphan and that's why do not understand how families operate.

Virat objects to Bhavani calling Sai an orphan while Sai questions Bhavani for not caring about the emotional well-being of a mother.

Bhavani tells her that she only cares about having an heir to the family.

On hearing this, Sai adamantly tells Bhavani that as a mother of the child only she will decide who will carry her child to term and that will not be Patralekha.

When Virat also agrees with Sai, Bhavani tells Virat that he is blindly following Sai without caring for his family.