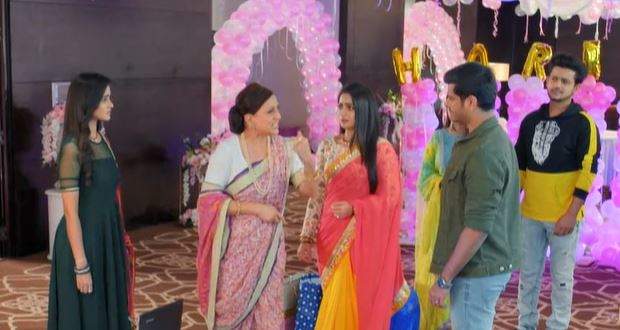 Today's Ghum Hai Kisi Ke Pyaar Mein (GHKKPM) 29 May 2021 episode starts with Sai standing firm against Bhavani as she tries to prove that Bhavani has done a big mistake by keeping a daughter away from her mother.

Meanwhile, Bhavani tries to defend herself by saying that whatever she did was for the welfare of her family's reputation.

At the same time, Ashwini gets emotional and blames Devyani for behaving so harshly with Harini.

Ninad raises his hand to slap Ashwini but Virat interrupts in between and tells everyone that as a atonement they should celebrate Harini's birthday and let her know that she has a very huge family to support her.

Despite of repeatedly requests by Sai and Virat, Bhavani denies to celebrate Harini's birthday.

Ninad, Omkar, and Patralekha support Bhavani with her decision.

Later, Sai tells Bhavani that somewhere she is responsible for Devyani's mental situation which makes Bhavani feel guilty about herself.

Virat supports Sai and says to everyone that now Harini is not accepting Devyani as her mother which is ruining Devyani's life.

Further, Bhavani accepts to celebrate Harini's birthday only for the sake of Devyani's happiness.

© Copyright tellybest.com, 2020, 2021. All Rights Reserved. Unauthorized use and/or duplication of any material from tellybest.com without written permission is strictly prohibited.
Cached Saved on: Sunday 19th of September 2021 01:24:34 AM