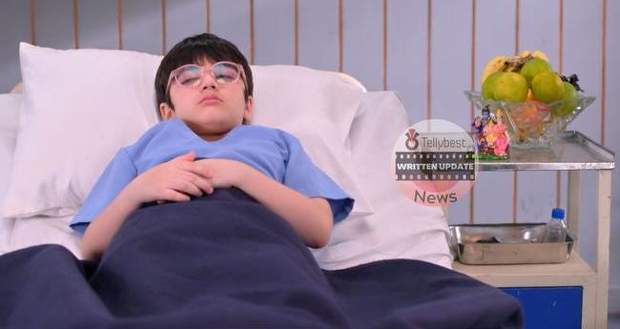 Virat puts cheer in his voice and tells Vinayak that they are going to London.

Just then Patralekha comes in with Modak which reminds Vinayak of Savi.

Meanwhile, Virat promises Vinayak that soon he will participate in the race.

In the meantime, Ashwini is praising Patralekha’s contribution to Virat’s life.

On the other hand, Patralekha tells Virat that she has also done something else for Vinayak to get better.

Later, Ninad tells Ashwini that Sai would have been the best option as London is a far cry and may not get the desired result.

However, Ashwini wants to keep Sai away from the Chavan family and calls her a black shadow who only takes away all the happiness from their life.

At the same time, Sai enters the hospital while Ashwini tells Ninad that making Sai a part of the Chavan household was the biggest mistake of her life which destroyed Virat's life.

Ashwini is angry at Sai for not informing them about being alive and putting Virat through hell.

Just then, Ashwini sees Sai in front of her.

Meanwhile, Mohit is assuring the client that Patralekha will be present at the meeting.

However, Omi tells Bhavani that it's not a women's cup of tea to deal with office matters especially when she has children to look after.

Harini overhears Omi and shames him for belittling women and calling them incapable just because they get pregnant.

She also questions Bhavani for listening to this garbage when she is a woman and gives Sai's example who would have managed everything wonderfully.

However, Bhavani doesn't like Harini's opinion and tells her to not take Sai’s name while Harinee mocks their huge egos which are coming in the way of Vinayak's treatment.

In the hospital, Ashwini and Sai look at each other with tear-filled eyes while Ashwini tells Sai to not call her 'aayi'.

Sai says she is very happy to see them but Ashwini stops her saying that they are not happy to see her because she is a wastrel of a daughter.

Just then Virat sees Sai standing outside and asks her what is she doing here.

Patralekha tells him that she called Sai for Vinayak’s treatment because only Sai can cure him.

Looking fierce, Patralekha tells Virat that Sai will be treating Vinayak from now on.

© Copyright tellybest.com, 2022, 2023. All Rights Reserved. Unauthorized use and/or duplication of any material from tellybest.com without written permission is strictly prohibited.
Cached Saved on: Monday 21st of November 2022 06:10:05 AMCached Disp on: Tuesday 29th of November 2022 10:50:23 AM