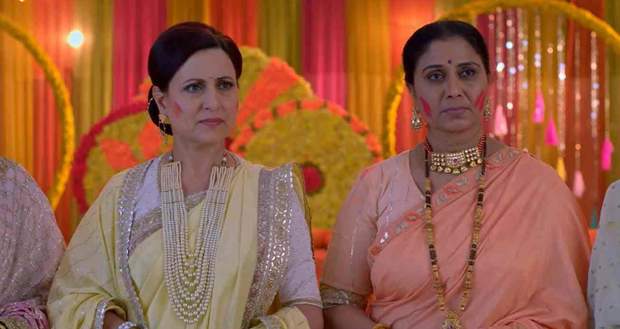 Today's Ghum Hai Kisi Ke Pyar Mein 2nd April 2022 episode starts with Samrat carrying Patralekha to bed and telling her that he has been waiting for this day for so long as he wanted her to come to him out of her own will.

Patralekha in her intoxicated state assumes Samrat to be Virat and tells him that she loves him immensely and completely.

Hearing Virat’s name on Patralekha’s lips, Samrat gets a shock and he questions Patralekha.

Coming out of her reverie, Partralekha realises her mistake and denies taking Virat's name and turns the accusation back to Samrat.

Samrat is confused at being blamed but overlooks it while coming close to Patralekha who dodges him while making an excuse of headache.

The next morning, Sai is smiling at remembering last night's activities while looking at sleeping Virat.

In her room, Patralekha is feeling uncomfortable at Samrat’s attention and leaves the room making excuses again.

While Sai is admiring Virat, she hears Shivani’s voice who is scolding a delivery guy for delivering a parcel from an unknown person.

Sai opens the parcel, thrown by Shivani and reads the letter inside which is an apology letter for Shivani from Rajeev.

Meanwhile, Virat wakes up and is feeling the aftereffect of ‘Bhang’.

Seeing Sai he accuses her of calling DIG sir and Press conference.

However, Sai stands strong against Virat’s anger while explaining her reasons.

Feeling pain in his shoulder, Virat is trying hard to remember last night.

Initially, Virat suspects Sunny of spiking his drink but later remembers eating Ashwini’s Gujiya and goes down to question her.

While everyone is busy in morning talks, Virat comes down accusing his family of making a mockery of him.

Samrat also tries to convince Virat of their innocence whereas Virat accuses them of betraying him last night.

Ashwini is stunned to hear Virat’s accusations and tries to defend herself.

Seeing Ashwini’s distress, Sunny tries to take the blame while Virat sees right through him.

Later, they all reach the same conclusion that Sai has added ‘Bhang’ in his food.