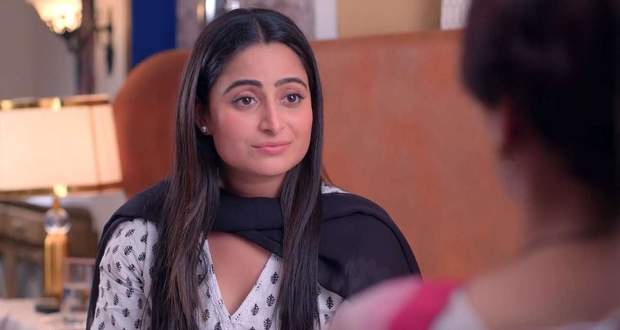 Ashwini and Bhavani get happy while Virat says that it's not possible due to Sai's condition.

Bhavani and Karishma tell stories they heard of many women becoming mothers even after the doctors stated that they cannot be mothers.

Just then, Sai comes there and again feels dizzy which makes some of the family members happy.

However, Sai tells them that it is all due to stress and is reluctant that she won't become pregnant again.

Ashwini and other family members insist Sai on getting checked while Sai agrees by telling them to not be too hopeful.

Meanwhile, Pakhi gets stressed thinking that Sai shouldn't be pregnant otherwise Virat will again divert his attention to Sai.

Pakhi starts sneezing and Sai advises Virat to take her to the hospital or bring medicines for her home which he agrees to.

Sai says that she's leaving while Virat offers to take Sai to the hospital and convinces her to agree.

Later, Pakhi cries to her mother that if Sai's pregnant, her plan would be ruined and Virat will again put his attention on Sai.

Elsewhere, Sai and Virat are eagerly waiting for the results when suddenly a kid bumps into her and breaks the pregnancy test.

Sai dejectedly tells Virat that she will call him after doing the test again.

Back at the Chavan mansion, Ashwini interrupts Pakhi and her mother's conversation while telling Pakhi that she knows what she is planning to do.

Later, Virat goes to take a leave for taking Pakhi to the hospital while Virat's senior Harish makes a personal comment about Virat's personal life.

Afterward, Virat and Pakhi are with the doctor and he puts his phone with Sai on call away from Pakhi so that Sai can listen to the conversation at her instructions.

The doctor tells them happily that the baby is growing fine and mistakes them as a couple but Pakhi stops Virat from correcting her as she continues talking to the doctor.

Later, in the hallways, Pakhi tells Virat that every credit goes to him since she has gotten better once he started taking care of her.

In the evening, the family waits for Sai to announce the results of her pregnancy reports while Pakhi arrives and questions them if they got any answer from Sai.

Just then, Sai arrives and Pakhi insinuates an argument with her.

Stopping the arguments, Bhavani questions Sai once again about whether she is pregnant or not.