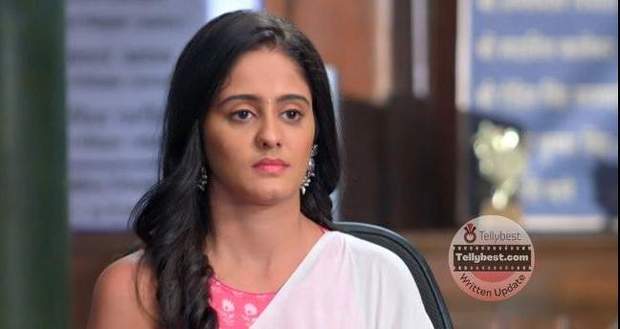 Meanwhile, Sai tells him if he really wants to thank her then he should never let their personal life get into their work life.

Later, Virat comes home and tries to tell Patralekha about Sai’s job but Patralekha continues to babble about movies and co-curricular activities for Vinayak.

Just then Ashwini comes there and asks Virat what is bothering him.

Patralekha also looks at Virat and assumes that the commissioner sir is upset with Virat for saying no and assures him that he will soon get over it.

Meanwhile, Virat tells Patralekha that he has accepted Sai as a doctor in charge.

Ashwini gets angry and scolds Virat for saying yes to Sai when he has promised Patralekha that he won't.

Hearing Bhavani accusing Sai of manipulation, Virat tells them that he is the one who said yes to Sai.

Patralekha gets disappointed to hear Virat and drops the bowl.

Meanwhile, Sonali comes to her, mocks her for trusting her husband, and warns her that someday this relationship can also break like a promise.

Patralekha walks out while the rest of the family looks at her worriedly.

Meanwhile, Savi comes to congratulate Sai for getting a job with the police and makes plans for her.

Later, Sai tells Usha that she does not have any choice and is ready to accept any consequence that will come her way.

In the meantime, Patralekha throws away all the food and TV that she has arranged for their movie night.

Just then Virat comes to the room and tells her to stop.

However, Patralekha is feeling aggressive and tells Virat that he has not been able to keep a single promise to her.

Virat accuses Patralekha of being insecure which triggers her and she reminds him that she was the one who has brought Sai into their life for their son.

She tells her that he is the one who is insecure and uses her to get back at his ex-wife.

In her anger, Patralekha tells him that he is not capable of taking care of one world let alone two.

Patralekha reminds him of the way he has been treating her after their marriage who has never respected her nor loved her.

Virat tries to appease her saying that she is taking the conversation in the wrong direction and making assumptions about him.

However, Patralekha asks him, how can he be so stupid to not understand how people will mock her when he will work with his ex-wife.

She tells him that he should also pack his things and go with Sai as he so wants to be with her.

However, Virat shuts her up and tells her to never let her pride get in the way of his duty.

He tells her that he respects her as a wife and will continue to do so.

The next day, Sai arrives at the police station to take charge of her duties.

Later, Virat's constable tells him that Patralekha has refused to give him tiffin and looks angry.

After a while, Patralekha comes to his office along with the tiffin and joins him.