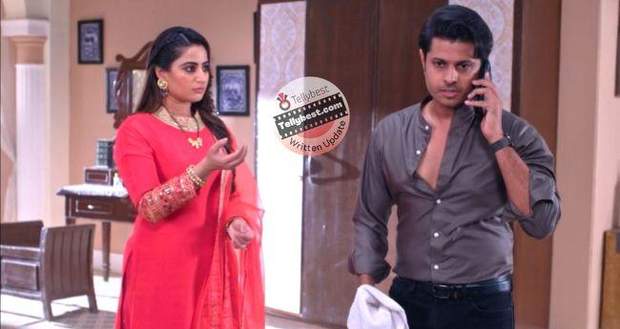 Today's Ghum Hai Kisi Ke Pyar Mein 2nd January 2023 episode starts with Sai scolding Pratap for behaving like a loafer for someone who has made her choice to be with someone else.

She calls him a coward and tells him that people who want to do something do that instead of talking and dramatising the situation.

Pratap gets provoked and comes down to hurt Sai but the police capture him while Sai tells them to give Pratap local anaesthesia.

Later Sai tells Sahiba that it was the only way to get Pratap down because he would not have listened to reason.

Sai also tells the senior doctor that Pratap needs to be transferred to a different facility where he can be treated for his mental illness.

Meanwhile, Virat is asking the dean what new information he wants him to have.

Dean tells Virat that master Veenu was the child of a car accident but he has made enquiries and they have sent one child to Bal orphanage matching his description.

Virat becomes hopeful realising that it is the same orphanage from where they have adopted Vinayak.

Savi and Vinayak come to Sahiba at the hospital and ask her to teach them pottery too.

Sahiba looks happy to see them and tells them to put their bag away and come back.

Meanwhile, Virat is at Bal orphanage where he finds out that Vinayak is their real baby Vinayak and he is the one he has adopted.

In the meantime, Pratap is reliving Sai’s words and gets out of control and grabs the gun from a nearby officer and kidnaps Vinayak and Savi who are passing by.

Later, Sai appreciates Sahiba’s pottery therapy which is helping the patients to get better.

Sahiba turns the talk about Vinayak and Sai’s bond which is unusual for the stepson and stepmother.

Just then, a constable comes to inform Sai that Pratap has gone out of hand and has kidnapped two kids.

Sai gets shocked to hear that Savi and Vinayak are in Pratap’s custody.

At the same time, Virat is thankful to God that he is the one who has adopted baby Vinayak.

Meanwhile, Savi tells Pratap to leave them or else their father will punish him badly as he is the police.

Pratap gets excited to hear that and tells Vinayak that now his father will fulfil his demands.

Later, Virat calls Vinayak and is shocked to hear his scared voice.

Just then, Pratap snatches Vinayak’s phone and tells him to find him so that he can tell him his demands.

Meanwhile, Bhavani taunts Vinayak for trying to get close to Sai like his father.

Patralekha feels offended and tells Bhavani that Vinayak is too young to understand all this and tells her to keep Vinayak out of this.

Later, Patralekha gets worried when Vinayak does not pick up his phone.

Meanwhile, Virat assures Sai that he is coming and will not let anything happen to the children.

After a while, Pratap tells Sai to call his girlfriend and a pandit so that he can get married to her and if she refuses then her children will suffer death.

However, Pratap tells Sahiba and Sai that he does not care about others as he has been wronged too.

Sai asks Pratap to give him some time when Pratap’s girlfriend's number does not connect.

Elsewhere, Patralekha calls Virat asking him about Sai’s hospital address as Vinayak is not picking up her phone.