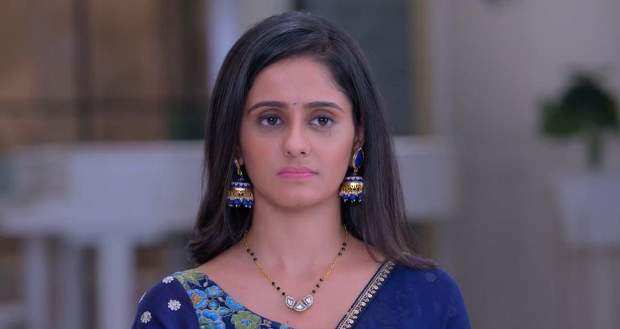 Today's Ghum Hai Kisi Ke Pyar Mein 2nd July 2022 episode starts with Geeta telling Patralekha that she is going to the hospital and has signed all the papers.

Patralekha tells them that Sai might have forgotten to get these papers signed however, she is from the technical department and it is her job to take care of these formalities.

Patralekha tells Geeta to read the paper before signing it.

On being asked by Yogesh, Patralekha tells them that the form states that if anything happens to Geeta during pregnancy then neither the hospital nor Sai and Virat will be responsible for it.

It also says that if anything goes wrong with the pregnancy then Geeta will either have to pay the compensation or go to jail.

Her husband asks her what she means about anything happening to Geeta.

Patralekha tells them that there is a risk in medical procedures and that anything can happen to a person going through it.

Geeta does not believe that Sai can betray them and opts to call Sai.

Patralekha makes Yogesh talk to Vaishali who pretended to be a victim of a surrogacy scam.

Geeta is sure that Sai cannot cheat her and decides to call her.

Sai who is waiting for Geeta and calls her to find out about her whereabouts.

However, Yogesh gets angry and tells Geeta that Sai has betrayed them and there is no need to call her. He blocks her number from Geeta’s phone.

Geeta tries to reason with him but he tells her that he cannot risk her life for Sai.

Meanwhile, Sai and Virat are getting worried as the time passes.

Bhavani taunts Sai and Virat for not trusting Patralekha.

After a while, Virat suggests Patralekha's name but Sai rejects the idea and goes to get Geeta herself.

Meanwhile, Patralekha calls Bhavani who tells her that Sai has gone to get Geeta.

Patralekha has expected this from Sai and calls the chain thieves to be ready to keep Sai from reaching Geeta.

Meanwhile, the doctor asks Virat to bring Geeta within 40 minutes else she cannot do anything afterwards.

Bhavani tells Virat to call Patralekha while Virat does not want to go against Sai.

Virat tries to contact Sai again but Sai has fallen unconscious by then.

© Copyright tellybest.com, 2022, 2023. All Rights Reserved. Unauthorized use and/or duplication of any material from tellybest.com without written permission is strictly prohibited.
Cached Saved on: Monday 21st of November 2022 06:15:23 AMCached Disp on: Monday 5th of December 2022 12:42:59 PM