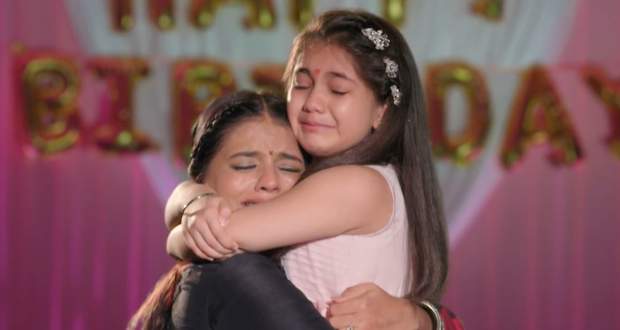 Today's Ghum Hai Kisi Ke Pyaar Mein (GHKKPM) 2 June 2021 episode starts with Sai telling Pulkit that they are going to portray a play and make a genuine effort to bring together Harini and Devyani.

During the entire play, Virat narrates the story and Sai plays Harini's role whereas Patralekha carries out Devyani's role.

The play goes nicely making everyone emotional and Ashwini repeatedly pleads to God to let Harini accept Devyani as her mother.

Soon as the play gets over, Devyani stands on stage requesting Harini to accept her as her mother.

Harini gets emotional and realises that she made a mistake by behaving rudely with her mother.

She runs towards Devyani and hugs her tightly accepting Devyani as her mother.

Everyone gets overjoyed to see the mother-daughter duo getting reunited again.

In the moment of joy, Sai and Patralekha hug each other as their efforts finally show the result.

Later, Sai and Virat appreciate Mohit for putting efforts into the play and making it a memorable one.

Pulkit pours out his heart and expresses his gratitude to Sai and Virat.

He thanks them for everything they did to reunite Harini and Devyani.

Upcoming Ghum Hai KisiKe Pyaar Mein (GHKPM) episode update: Patralekha asks for an explanation to Virat for breaking his promise that he gave her before marrying Sai.

© Copyright tellybest.com, 2020, 2021. All Rights Reserved. Unauthorized use and/or duplication of any material from tellybest.com without written permission is strictly prohibited.
Cached Saved on: Wednesday 22nd of September 2021 11:51:39 PM