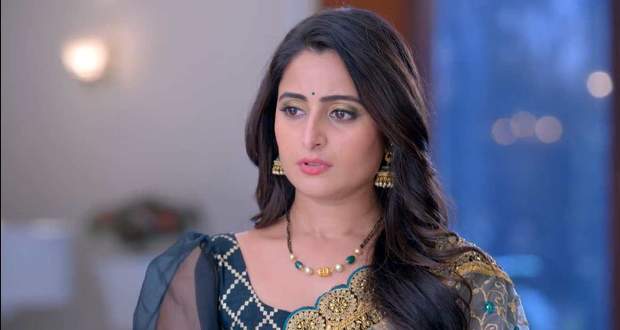 Sai reminds Jagthap of Virat’s beating while he vulgarly talks with Sai, making Samrat angry and becoming physical with him.

However, Jagthap’s goon controls him and puts him aside.

Jagthap puts a knife on Bhavani which scares everyone.

Elsewhere, Virat is in an office asking Kamath reasons for helping him while he tells him that Jagthap is a common enemy and gives him 1 crore rupees.

Meanwhile, Sai tells him to remove the knife and Jagthap obeys playfully.

He also tells her that his father will take care of Virat because he has made him angry.

Kamath puts a bag in Virat’s lap just then inspector Kadam comes to arrest him for taking a bribe from Kamath.

Meanwhile, Sai calls the police station and comes to know about Virat’s plight and assures him of her arrival.

Samrat hits Jagthap when he talks vulgarly with Sai but Sai stops him and tells Mohit to record Vitthal Maane's video to ruin his reputation as a politician.

Vitthal Mane gets threatened and leaves after making sure that the video is deleted.

Afterwards, Mohit and Patralekha take Mansi to the hospital while Sai reaches the police station with Samrat.

Seeing Virat in jail Sai gets disheartened and regrets going for an internship.

Virat tells her that it is not time to quit and that they will fight till the end.

Virat tells Sai that he will have to prove that Kamath has tried to trap him but he cannot do so from jail.

However, Sai assures him that she will get evidence for Virat while Samrat assures him of his support for Sai.

At night Jagthap comes to Sai’s room and tries to force himself on her but Samrat comes in time and gives Jagthap a sound beating that renders him unconscious.

© Copyright tellybest.com, 2022, 2023. All Rights Reserved. Unauthorized use and/or duplication of any material from tellybest.com without written permission is strictly prohibited.
Cached Saved on: Friday 27th of January 2023 12:35:08 AMCached Disp on: Sunday 5th of February 2023 01:49:01 PM