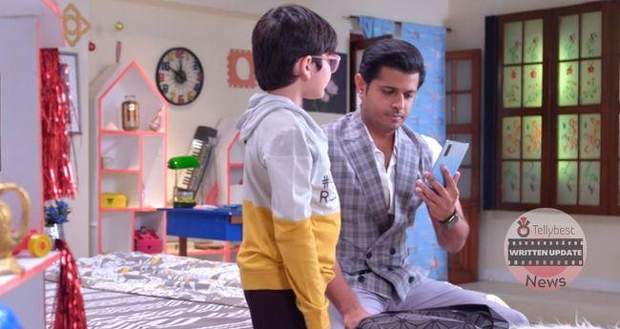 Bhavani brings out the topic of Sai telling everyone that she knew beforehand that Sai is not needed for Vinayak.

Patralekha stays quiet about Sai being responsible for Vinayak’s success.

Bhavani tells Omi to send the tickets to Sai so that she can leave Nagpur.

Patralekha takes the ticket from Omi telling him that she will send the courier.

However, Patralekha has no intention of sending the tickets to Sai as her presence is important for Vinayak’s race.

Meanwhile, Savi questions Sai about going out without telling her.

Just then the bell rings and Sai receives Vinayak's race passes and something else.

The following day, Vinayak is prepared for the race while the whole family surround him to encourage him and give him their blessings.

Vinayak expresses being nervous and how he wants to make everyone proud.

Ninad tells him to only focus on giving his best and leave the results to God.

Meanwhile, Patralekha shows the family the customised T-Shirt saying "Team Vinu" she has bought for everyone.

In the meantime, Sai and Savi also have the same T-shirt and are ready to go see the race.

Usha praises Sai for not taking out Virat’s anger on Vinayak and going to the race to encourage him.

Sai tells her that she cannot punish Vinayak for Virat's misbehaviour especially when Vinayak has worked so hard for this day.

Meanwhile, Vinayak’s bully classmates make fun of him and demoralise him by calling him a loser.

On the other hand, Sai and Savi are stuck in traffic while Patralekha and Vinayak wait for them anxiously.

Just then Patralekha messages Sai asking where she is as the race is about to begin.

Sai and Savi leave the auto and walk on foot to reach school but meet with an accident and get injured.

However, Sai perseveres to reach the school.

Vinayak can not see Savi and Sai in the crowd and is worried that he will not be able to win the race without them.

Meanwhile, Sai's feet hurt a lot and at some point, she cannot walk.

Later, Vinayak’s class race begins and the Chavan's are sure of his win.

Ashwini observes how nervous he looks but Virat assures her that this is because it is his first time at the race.

Patralekha is equally worried and waiting for Sai who hasn’t yet arrived.

As the race begins, Virat and the whole family cheer for Vinayak but Vinayak freezes at the start line while Patralekha and Virat urge him to run.