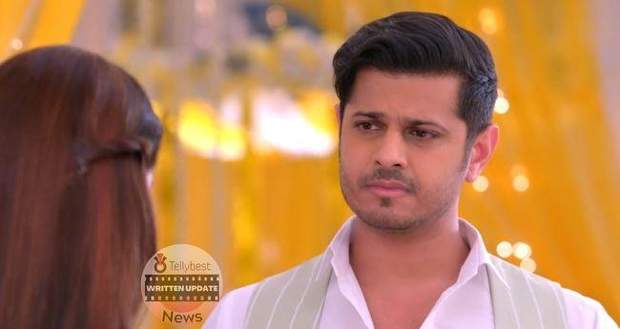 Meanwhile, Sai tells Gulab Rao that she is her daughter's father and a mother both. She also tells him that he cannot bear it that a woman stands up for her right and it is the reason he is trying to put allegations on her so that she gets subdued by it.

She tells the whole Village that Gulab Rao has a vendetta against her because she is building a hospital on the land which he has selected for his resort and has often come to her house to threaten her to back out.

At the Chavan house, Virat asks about Vinayak at the dinner table while Patralekha tells him that he has slept.

Meanwhile, Sonali asks Mohit about Karishma while Mohit tells her that he knows nothing about her coming and goings.

Later, Bhavani gives Virat tickets for the Maldives and asks Virat to take Patralekha for a holiday.

Bhavani also tells him that they should plan another baby for Vinayak’s sake.

Virat becomes angry and tells them that they should have asked him before planning all this. He also berates Patralekha for agreeing to their plan without consulting him first.

Meanwhile, Savi asks Sai to tell her now who her father is.

Sai is angry at being humiliated in public and vents her anger on Savi telling her that when the time is right she will tell her everything.

In his room, Virat accuses Patralekha of being party to the family members' plans and vents his anger on her.

Patralekha gets angry in return and shames Virat for thinking so little about her.

She also tells him that she knows that there is no hope for their relationship as he still pines for someone who is dead.

Virat apologises to Patralekha for suspecting her intentions and calls this whole scenario awkward.

Partalekha gets instigated at the word and tells Virat that only he can feel awkward at having to spend time with his wife.

Patralekha tells him that his family cares for them and that expecting another child from them is not a crime as they are not aware of the reality of their relationship.

Patralekha tells Virat that he has become a shell of a person who only lives with memories of the past and she feels helpless that she is not able to do anything for him either as a wife or as a friend.

Feeling hurt at Virat’s accusation, Patralekha tells him to come back as every time he hurt himself she feels its pain.