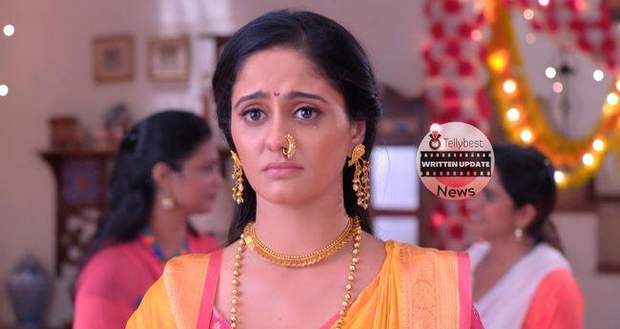 Today's Ghum Hai Kisi Ke Pyar Mein 30th August 2022 episode starts with Patralekha going to get Vinayak’s medicine from his bag and does not notice Sai and Savi’s picture lying on the floor.

Later, Patralekha gets upset hearing about Vinayak being sick at the camp and complains to Virat for keeping her in the dark about her son.

Meanwhile, Jagtap brings a gun as a gift for Savi and gets his hackles up at hearing about a kidnapping attempt on Savi.

Later, Virat comes to apologise to Patralekha for keeping Vinayak's injuries a secret whereas Patralekha feels dejected at being kept at a distance despite her efforts.

Virat assures Patralekha that with time Vinayak will get close to her and understand her value in his life.

After a while, Virat gives medicine to Patralekha while she talks about Vinayak’s time at the camp.

Virat also talks about the positive change that Vinayak has undergone at the camp and praises Savi’s cuteness and bravery.

Patralekha also reminds Virat about his desire to name their daughter Savi and taunts him for remembering everything about Sai.

On the other hand, Patralekha and Mohit are discussing business at the breakfast table while Omi intervenes and suggests dropping prices to close the deal.

However, Patralekha is against the strategy and tells Omi that they will suffer a bigger loss in future.

Later, Bhavani also takes Patralekha’s side and praises her efforts in taking care of home and business.

Elsewhere, Gulab Rao enters Sai’s house on the pretext of taking Lord Ganesha’s blessings and offers a bribe to keep Sai from building a hospital where he wants to construct a resort.

However, Sai gets angry and throws away Gulab Rao’s dream project from the house along with him with the assurance that people like him do not scare her.

© Copyright tellybest.com, 2020, 2021. All Rights Reserved. Unauthorized use and/or duplication of any material from tellybest.com without written permission is strictly prohibited.
Cached Saved on: Saturday 1st of October 2022 11:56:42 PM