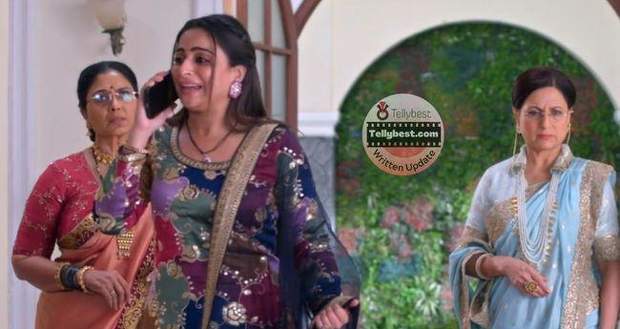 Today's Ghum Hai Kisi Ke Pyar Mein 30th December 2022 episode starts with Sahiba (of Teri Meri Doriyann) talking about tea and that it is like petrol that runs her engine.

Sai teases Sahiba for being in love with tea and tells her that her tea destination has arrived.

Sahiba praises her father’s tea and tells Sai that she will fall in love with tea if she drinks that.

Sai overhears their comment and invites Sahiba to reg them for their abusive behaviour.

Sai tells Sahiba to give these nomads her number.

The hooligans get embarrassed at being called out on their actions and think of leaving the place.

Sai and Sahiba make the spectacle of the hooligans and make them apologise and do sit-ups.

Meanwhile, Patralekha is looking for Vinayak and is getting worried.

Bhavani mocks Patralekha for being so worried as Vinayak must be here somewhere or talking to Sai on a video call.

Patralekha tells Bhavani that she has searched the whole household and Vinayak is nowhere to be found.

Sonali tells Bhavani that maybe Vinayak left home to be with Sai because she has scolded him and asked him not to talk about Sai.

Patralekha looks agitated and does not believe that Vinayak can go alone anywhere.

Virat is a minute away from his destination when he gets the call from Patralekha who sounds panic-stricken.

On hearing that Vinayak is nowhere to be found, Virat tells Patralekha to calm down and that he will check Sai’s house first and then come home.

Just then Virat looks in the back view mirror and sees Vinayak lodged in the car.

Virat tells Vinayak what he did is wrong and he should not have worried his mother for something his Grandmother said.

However, Vinayak asks Virat to take him with him and that he will not bother him.

He questions Virat about the toys in the car.

Virat tells him that he is going to meet someone who might become a new best friend to him and Savi.

He also tells them to let him meet that person first.

Later, Virat rings the doorbell of the house and enquires about their child who was once called Master Veenu.

Both Mr and Mrs Sheshadri get worried hearing them and asks him why is he asking that.

Vinayak shows them his ID card and asks them if he can come inside to talk to them.

Both Mrs and Mr Sheshadri get daunted by Virat’s designation and wants to know why is he enquiring about their son.

On being told that he is Kartik’s/Veenu’s father, Mrs Sheshadri gets agitated and tells Virat that he cannot claim their son to be his and he should leave now.

Virat tells his story about losing Veenu in a bus accident and is here to meet him once.

Mr Sheshadri convinces Mrs Sheshadri to let Kartik meet Virat and try to understand his feelings as a father who lost his son.

Mrs Sheshadri is scared of losing her son but gives Virat the benefit of doubt on her husband's request.

Afterwards, Mr Sheshadri tells Virat to wait while he gets Kartik which makes Virat extremely happy.

Elsewhere, Sahiba dresses Savi in Punjabi style while she goes to call Vinayak to show him her new look.

Meanwhile, Sahiba admires Savi’s baby picture while Sai tells her that this baby is her first child who is lost to them and still pains her and Virat.

Hearing the sad story, Sahiba tells Sai that she will pray to God to find Vinayak for them so their family can be complete.