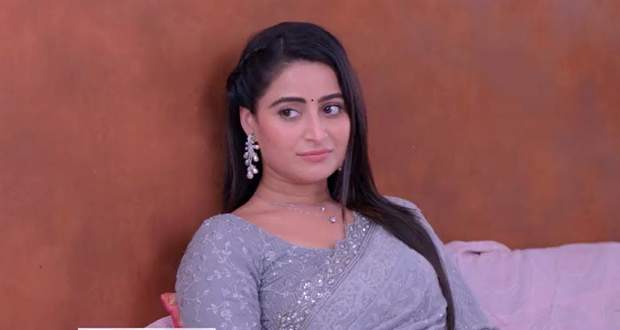 Today's Ghum Hai Kisi Ke Pyar Mein 30th July 2022 episode starts with Patralekha asking Virat for bringing Sai with her when she is the reason for coming here.

Sai tells her that she is carrying her child and should not have left the house without telling anyone.

On being misunderstood, Patralekha tells Virat that she is not irresponsible to put his child in danger.

Patralekha blames Sai and tells him that Sai is obstinate about getting her sign on papers.

Virat questions her about not going to her mother's place instead of coming here while Patralekha tells her that she does not want to worry about her mother and wants to feel close to Samrat.

Virat tells Patralekha that she should have told him and he would have brought her here.

Patralekha mocks him for thinking that Sai would not have allowed him to take her anywhere.

Virat tries to convince her that everyone is missing her and is worried about her and requests her to come home.

Patalekha tells him that with Sai living under the same roof, she cannot return to that suffocation.

After ample of arguments, Sai agrees to let the matter of papers go to appease Patralekha and also agrees to stay away from her.

After a while, Sai and Virat return home with Patralekha.

Patralekha tells them all that she had to leave because she was feeling lonely and that is why she went to Samrat’s place of work.

Bhavani assures her that Sai will not come close to Patralekha from now on.

Patralekha tells everyone that she is back because of Virat and not Sai and tells her to not bother about Sai as she has taken care of the problem.

She also tells them that from now on Virat will take care of her instead of Sai.

Sai tells her that Patralekha has blackmailed her into an agreement and that is why she has agreed to her demands.

Later, Patralekha asks Virat to take her to her room while Sai looks at them helplessly.

After a while, Patralekha tells Vaishali that she has done everything as per the plan so that she can get rid of Sai.

In the kitchen, Sai tells Ashwini that they found Patralekha at the cliff’s edge.

Vaishali is also horrified to hear of Patralekha’s stunts at the cliff.

Meanwhile, Sai tells Ashwini that to save her child she had to agree with Patralekha and now if Virat will take care of her then she will be able to guide him.