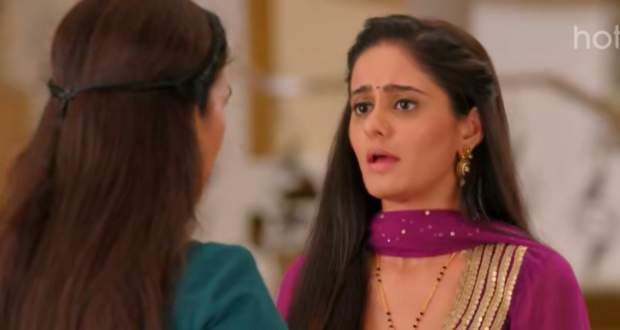 Today's Ghum Hai Kisi Ke Pyaar Mein (GHKKPM) 30 June 2021 episode starts with Virat asking Sai about the function and her informing him that she has to sell 20 tickets.

He makes fun of her and teases her by saying that she should sell the tickets to his family.

He gives her money for the tickets which are not sold until now but she refuses to say that she does not want his money.

However, she asks for his help in her plan and imitates Bhavani making him laugh.

She asks her if he could dance with her instead of her friend, Ajinkya but she takes it as a joke.

She refuses and goes as Virat thinks to impress her.

Virat dances for her and makes her dance with him which surprises her.

The next morning, Shivani gets ready for Sai's college function but the Chavan family taunts her calling her a divorced woman.

Ashwini stands up for Sai and announces that she is going which makes Bhavani and Ninad angry at her.

© Copyright tellybest.com, 2020, 2021. All Rights Reserved. Unauthorized use and/or duplication of any material from tellybest.com without written permission is strictly prohibited.
Cached Saved on: Wednesday 19th of January 2022 01:11:14 PM