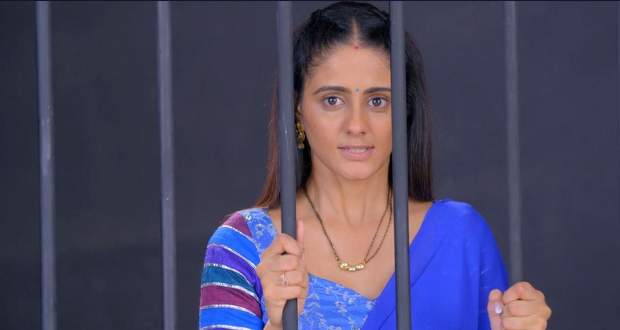 Sai is grateful to be out and thanks everyone.

After a while, Sai tells Virat that she wants to see Jagtap behind bars for killing her father.

At the Chavan house, Ashwini welcomes Sai while Bhavani berates her for showing affection to Sai.

Just then Jagtap comes with his goon to the house shocking everyone.

Virat warns Jagtap from entering the house while Jagtap ignores his threat and enters the house.

Jagtap makes fun of Sai’s family and introduces himself as Malhar’s brother and Sai’s lover.

Later, Virat lashes out at Jagtap and threatens him however, Jagtap does not feel threatened but shows Sai and Virat a court order.

After a while, Sai comes forward and takes the court order from Jagtap while he looks at them victoriously.

The letter was a shock for Sai as it asked for compensation of 5 crores for killing Malhar.

Sai tells Jagtap that he is out of his mind for thinking that she will pay money to him despite doing nothing to Malhar.

When Patralekha asks how they will arrange the money, Jagtap tells them that it is not his concern and also suggests selling the house to arrange money.

After Jagtap’s departure, Virat also goes to investigate the case to prove Sai's innocence. He assures Sai that once she is proven free she will not have to compensation.

Afterwards, Sai explains to the Chavan family about Jagtap's allegations of being her lover and tells them about Virat’s reasons for marrying her.

Bhavani and Patralekhs curse Sai for coming into their life.

Samrat defends Sai and asks them to trust Virat but Sonali calls Virat blind in love and trustworthy enough.

Bhavani also tells Sai that she will have to pay the compensation herself if it comes to that.

© Copyright tellybest.com, 2020, 2021. All Rights Reserved. Unauthorized use and/or duplication of any material from tellybest.com without written permission is strictly prohibited.
Cached Saved on: Sunday 2nd of October 2022 12:10:09 PMCached Disp on: Friday 7th of October 2022 02:54:56 PM