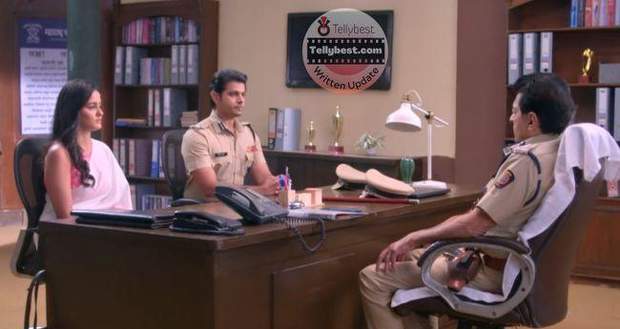 Later, they find two officers half lodged under the car and they struggled to get them out of it.

In the meanwhile, Sai hurts her leg but perseveres to help the officers.

Afterwards, Virat carries Sai in her arms to another hurt officer.

Just then ambulances and commissioner sir arrive at the accident site.

Commissioner sir is surprised to see Sai there but she explains being with Virat at the time of the phone call.

The doctor and commissioner both praise Sai for giving them timely first aid.

Later, Savi describes her first day at school and tells Sai that she had a blast.

On the other hand, Vinayak is equally happy at his school and tells Virat that he is grateful to him for sending him to this school.

Meanwhile, commissioner sir comes to Chavan's house and praises Virat and Sai for saving many lives that day.

After a while, commissioner sir asks Virat about including Sai in their team as a doctor.

Virat is astonished to hear the proposal and asks commissioner sir what has Sai said about it.

Meanwhile, Usha reminds Sai that they have financial needs for which she should take the job.

However, Sai is not convinced to work with a man who is always interfering in their life.

Later, Virat refuses to work with Sai while commissioner sir tells him that Sai gave the same answer to him.

However, he emphasises on SaiRat being a good team and asks them to think through the night before giving him the answer.

In the meantime, Patralekha comes to Virat and apologises for not supporting him in his decision about Vinayak school and going behind his back.

Afterwards, she tells him that from now on she will directly tell him all the problems that trouble her and he can decide what he wants to do about it.

After a pause, Patralekha tells Virat that she knows about commissioner sir’s proposal to work with Sai and she thinks he should refuse because no wife will want her husband to work with his ex-wife.

She also tells him that in the long run, it is going to create problems between them and the children.

Virat is quietly listening to Patralekha while she goes on talking about the fragility of their relationship.

Later, Virat assures Patralekha that he is going to refuse the offer.