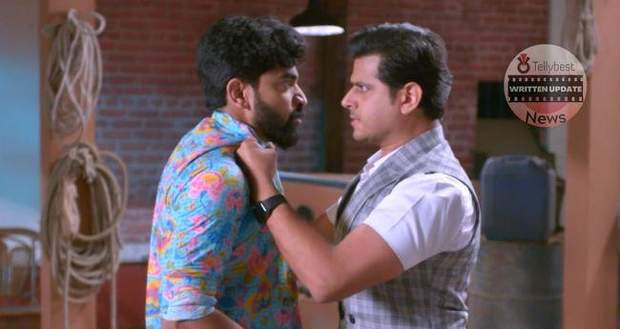 She says that if a woman earns more than her husband then that is a problem and if a woman is well dressed then her character is questionable.

Sai tells Virat he has no right over her and is not answerable to him. She tells him that he is nothing to him and he should not dare to touch her in future.

Sai warns him that if he repeats any of this, he will get a slap and a police complaint.

Patralekha tells Vinayak that he will have to eat healthy as his race is coming and if he wins this race then Sai will leave their lives forever.

After a while, Sai comes back to the house and tells Usha that from now on Virat has no right to find out anything about Savi.

In the meantime, Vinayak and Savi make plans to adopt Virat and convince him into accepting their proposal to become their father so that they can live together.

Later, Virat recalls Sai’s slap and words and angrily shouts in the car about hating her.

At home, Patralekha is worrying about Virat when he comes inside looking angry.

Wiping his hands from the towel, he asks Patralekha in a driven tone to call Vinayak and he himself will prepare him for the race.

Later, Vinayak and Virat are practising and Vinayak asks him to open his braces and then he will run.

Meanwhile, Vinayak plans to win the race so that he can ask Virat to adopt Savi and live together happily.

Elsewhere, Jagthap is making his goons drink tea and tells them that it is his favourite drink from now on.

Sai comes there and slaps Jagthap for letting his father Vitthal Mane out of control.

Jagthap looks at her shocked and asks Sai why has she slapped him and what has he done to deserve a slap.

Sai tells him about Vitthal’s visit to Chavan's house and spews nonsense about her being in a relationship with him.

After venting her anger, Sai tells him that if his father ever again tries something like that then she will not let him come near Savi ever again.

Hearing Sai’s threat makes Jagthap sweat and he tells her that he will surely talk to his father and if she wants he will go to Chavan's house and ask for forgiveness.

Sai tells him to never leave the house to reach out to Chavan's house and that there is no place for him in her life.

Sai threatens Jagthap to never come near Savi from now on and that men like him and Virat causes more problem in Woman’s life.

Jagthap begs Sai to not take away the right to meet Savi and he will do as she says.

Meanwhile, Virat is too focused on Vinayak's race and pushes him too hard to practise.

However, Vinayak feels sad and disappointed when he cannot run fast.

He feels dejected about not being able to win the race.

© Copyright tellybest.com, 2022, 2023. All Rights Reserved. Unauthorized use and/or duplication of any material from tellybest.com without written permission is strictly prohibited.
Cached Saved on: Monday 21st of November 2022 03:16:22 AMCached Disp on: Saturday 10th of December 2022 01:39:16 PM