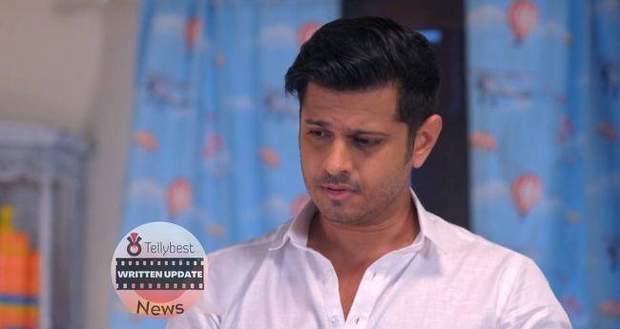 Gulab Rao is not impressed with Jagthap’s threat while Jagthap tells him that his father keeps MLAs like him in his pockets and it is better to understand the easy way else he will have to use other ways to make him understand.

At the Chavan house, Patralekha and Karishma are cooking in the kitchen when Karishma gets a call from someone and she lies to Patralekha about it.

Just then Ashwini collides with Karishma going out and later asks Patralekha about Virat and Patralekha’s relationship.

Patralekha tries to dodge the question and assures Ashwini that everything is fine between her and Virat.

Ashwini is not happy with their living arrangement of separate beds and counsels Patralekha to work on their relationship and make it worth living.

Later, Sai scolds Jagthap for interfering in her business and tells him that she does not need his help in conducting her affairs and asks him to stay away from her and her daughter.

On the other hand, Bhavani feeds Modak to Vinayak and asks him to keep it secret.

After a while, Vinayak refuses to eat dinner and asks Patralekha to feed him something similar to what he has eaten at Savi’shouse.

However, Virat convinces him to eat.

In the meantime, Vinayak asks Virat about having Savi as a sister.

Bhavani tells Virat and Patralekha to plan another child so that Vinayak gets a sibling to play with.

However, Patralekha tells her that they want to focus on Vinayak for now.

Meanwhile, Savi is missing Vinayak and narrates a story to Sai about him.

Later she remembers Vinayak’s numbers and goes to make a call.

On the other hand, Vinayak is also missing Savi and wonders why she has not used his number to call him.

Just then, Vinayak gets a call from Savi and becomes happy.

Virat also gets excited to see Savi while Savi tells him that Sai has taken away her gun from her.

Virat and Vinayak laugh at Savi’s complaint and Virat promises to get her a new gun when they next meet.

Before Sai could also join Savi to talk with Vinayak the call gets disconnected due to poor network.

Both Savi and Vinayak get disappointed while Virat and Sai console them about talking some other time.

© Copyright tellybest.com, 2020, 2021. All Rights Reserved. Unauthorized use and/or duplication of any material from tellybest.com without written permission is strictly prohibited.
Cached Saved on: Saturday 1st of October 2022 10:50:27 PM