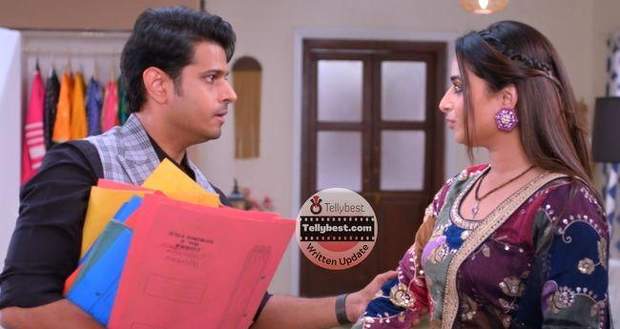 Just then Mr Sheshadri brings Kartik/Master Veenu to the lounge and Virat looks at him in stunned silence while the child looks at him curiously.

Virat touches him with love but encounters a birthmark on Kartik’s hand and becomes curious.

Mr Sheshadri shows Kartik’s picture of the day of adoption while Mrs Sheshadri tells him that Kartik had a bracelet in his hand on which Master Veenu was written.

Seeing the bracelet, Virat tells Mr and Mrs Sheshadri that their son is not his Vinayak as he never had this birthmark or the bracelet on it where it is written, Veenu Gopal.

Hearing that Mrs and Mr Sheshadri sigh with relief and tells Virat that they will pray for him so that he finds his son soon.

Meanwhile, Sai, Sahiba, Usha and Savi are having dinner where Sahiba tells Usha about herself and the significance of her name which is derived from the fabled Mirza and Sahiba.

Sai teases Sahiba about having Mirza while Sahiba tells her that she has so many ambitions and responsibilities.

However, Sai tells her that having someone in life is not a bad thing.

She sights her own example and tells Sahiba that her husband is the main reason she was able to study medicine and he was her greatest companion.

Later, Virat comes back to the car with tears streaming down his eyes but wipes it seeing Vinayak.

Vinayak questions him about the friend and why is he crying.

Virat tells him that he tried to find him but it seems he has lost him forever.

Vinayak quotes Sai to Vinayak saying “Agar Man Ka Ho to Achcha Aur Agar Man Ka Na Ho To Aur Bhi Achcha, as there is God’s will in that”.

Virat looks at him lovingly while Vinayak promises him that he will always be there for him.

After a while, Patralekha questions Vinayak for leaving her without telling her or thinking about her.

Vinayak feels sorry but tells Patralekha that Bhavani was scolding him without any reason and that is why he does not want to stay home and climbs Virat’s car seeing him leaving.

Patralekha reminds Vinayak about her fragile condition and event of the past when he left for Ram Leela Maidan and almost died.

Vinayak apologises to Patralekha while she tells him never to repeat this mistake in future.

The next day, Virat is thinking about all the efforts and investigations that went in vain and wonders why God put him on this road which was destined for failure.

In the meantime, Patralekha is about to call Virat when his phone begins to ring and she receives the call.

The dean of City hospital is telling Patralekha about the person Virat is searching for when Virat comes out and takes the call himself.

Elsewhere Sai is making rounds in the trauma ward where Sahiba comes and praises her popularity among patients.

Just then, a senior doctor comes there telling Sai that Pratap has turned suicidal and is standing on the roof.

Sai and Sahiba try to stop Pratap along with other people while Pratap tells her about his girlfriend who has ditched him for someone else after he was lost for a few days and is not talking to him.

Sahiba tells him to talk with her but he is bitter at being betrayed and is about to jump when Sai scolds him.