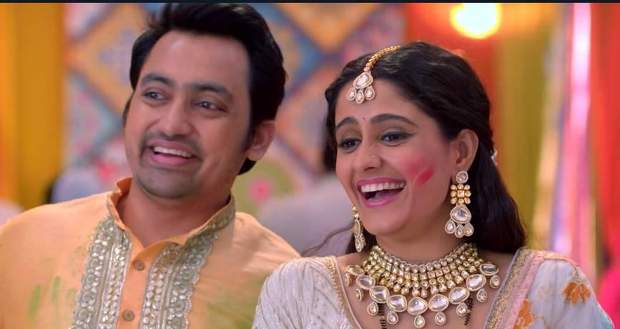 A woman riding on a throne comes inside who Bhavani recognises as Barkha.

Before meeting others she gives a dance performance gaining lots of applause.

Barkha wishes Happy Holi to Sai and Virat and also expresses her happiness in finding them together.

Later, Barkha tells Sai and Patralekha to do a face-off dance.

After the performance, Mansi expresses her happiness at seeing Virat behaving like his old self.

However, Bhavani is worried about the next day and Virat’s reaction at today’s party.

After a while, Sai hugs Virat and Patralekha also go to hug Virat but Sai stops her.

Surprised to see Sai sober, Patralekha questions Sai for not being intoxicated.

Sai explains to Patralekha how she has switched 'Thandai' while Patralekha was otherwise occupied.

Patralekha loses her temper for being fooled by Sai and shouts at her.

Meanwhile, Sai warns Patralekha to be wary of her in future.

Afterwards, Siya praises Sai for her dance and shows her pictures of Virat and Sai.

Karishma asks Sai to share these pictures in the family group but Sai expresses her helplessness for not being a part of the group anymore.

On being questioned by DIG, Mohit immediately adds Sai to the group by calling it a mere misunderstanding.

Later, Barkha announces Sai as the winner for dancing beautifully and showing sportsmanship towards Patralekha.

As Barkha takes their leave, Bhavani presents her with money and a gift for coming to their Holi party.

Meanwhile, Bhavani also complains to Barkha for praising Sai so much.