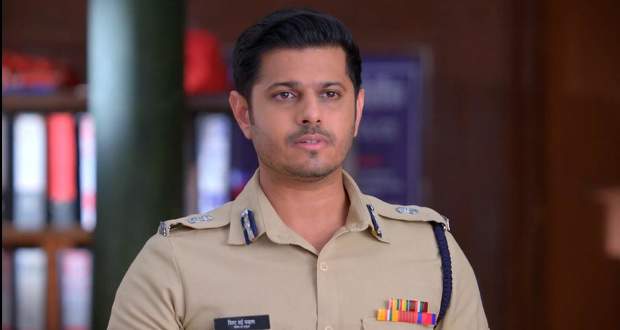 Virat interviewing the hospital staff about Malhar’s death where the nurse tells them that only Sai can give the injection to Malhar however she has not seen her do it.

One nurse on the staff comes forward and accepts seeing Sai administering the injection to Malhar.

when another faculty member accuses Thuraat of hiding something Thuraat acts innocent but gets angry at being asked about not reporting Malhar's admission to the police and accuses Virat of being biased.

Afterwards, Virat gets worried as all the evidence is pointing toward Sai.

Meanwhile, Sai is sharing her grief with her father when Jagtap calls her.

Sai gets angry at Jagtap whereas he tells her that he still loves her and can relieve her from the compensation if she agrees to marry him.

Sai is disgusted at Jagtap’s proposal and threatens him that after all this debacle of Malhar’s death is over she will come for him to avenge Kamal’s death.

Just then Shivani, Rajeev, Samrat and Devi come with their possessions to contribute to her compensation money.

All this love brings tears to Sai’s eyes and she is grateful for their love.

Meanwhile. Virat is interviewing the patient in the emergency ward who talks in favour of Sai.

Dr Thuraat asks the nurse to keep Virat from getting more favourable testimonies whereas the nurse points to Thuraat's mistake of assigning Sai to Malhar which makes Thuraat angry and he threatens the nurse with termination.

Meanwhile, Omi asked the lawyer to prepare documents stating that Sai has no share in the property while the lawyer tells them that it is not possible unless Virat divorce her or Virat is also removed from the will.

Mohit feels ashamed at Omi’s selfish behaviour and tells Sai that although he has no savings yet, he can give her his share in the Chavan property.

Sai tells them to not worry as she will not sell this house to pay the compensation.

While they were arguing about the property Mansi's asthma attack distracted everyone.

Just then Jagtap’s goon cut the water, light and network connection of the Chavan house and displays Jagtap’s threatening message to everyone asking them to make Sai his wife.

© Copyright tellybest.com, 2022, 2023. All Rights Reserved. Unauthorized use and/or duplication of any material from tellybest.com without written permission is strictly prohibited.
Cached Saved on: Wednesday 25th of January 2023 07:17:02 PMCached Disp on: Sunday 5th of February 2023 12:09:33 PM