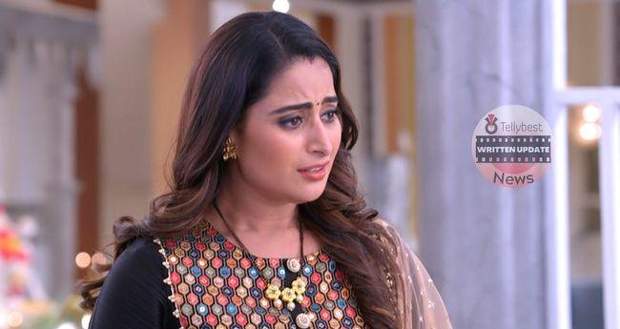 Today's Ghum Hai Kisi Ke Pyar Mein 31st October 2022 episode starts with Vinayak telling Virat that he will not be able to do anything nor will he be to make him feel proud.

However, Virat tells him that he already feels proud of him and tells him to stop practising as he is hurt.

Meanwhile, Omi gives Bhavani tickets for Kankauli and Garchiroli so that Sai can choose where should she go.

Later, Bhavani informs Patralekha of going to Ashtvinayak while Virat will live here with her and prays for Vinayak to win the race.

In the meantime, Vinayak comes home with Virat crying in pain.

Patralekha tells Vinayak to not worry and not put himself through pain.

She goes to call Sai to ask her to check on Vinayak when Virat stops her saying that Vinayak will not go to Sai.

Meanwhile, Vinayak tells Virat to take him to Sai as her treatment makes him well without pain.

However, Virat refuses to take him to Sai and tells him to learn to bear the pain as that will make him strong.

He also tells him that from now on he and the police academy’s best trainers will train him and he will learn to fly in no time.

Elsewhere, Savi asks Sai to cry to her heart's content for she is there to support her.

Narrating an incident of his training Virat tells Vinayak that once he was badly injured but he motivated himself by saying that “Virat Haar Nahi Manni Hai”.

He asks Vinayak whether he will accept defeat so easily.

Vinayak gets excited to be trained by professional trainers and tells him that he will send the selfie to Savi.

Patralekha has been listening to Virat worriedly and tells Virat that he is acting unreasonably with Vinayak and that she will take Vinayak to Sai herself.

Virat stops Patralekha from leaving and tells Patralekha how Sai insulted him and insinuated that he is calling her characterless when he can never do that.

He asks Patralekha that after being humiliated at Sai’s hand, how can he let Vinayak go to Sai.

Virat also asks Patralekha whether she will stand by him and support him in his decision.

Seeing Virat in need of assurance, Patralekha agrees to support him in all his decisions and tells him that she trusts him to do his best by Vinayak.

Meanwhile, Vinayak calls Savi to inform her that he will not be there as he is going to the police academy for training.

Savi becomes excited and asks Vinayak if she can also tag along.

Virat tries to refuse Savi by sighting excuse of the distance but Savi tells him that she is fine with the distance to watch police training from close by.

© Copyright tellybest.com, 2022, 2023. All Rights Reserved. Unauthorized use and/or duplication of any material from tellybest.com without written permission is strictly prohibited.
Cached Saved on: Monday 21st of November 2022 12:56:53 AMCached Disp on: Thursday 1st of December 2022 02:28:22 AM