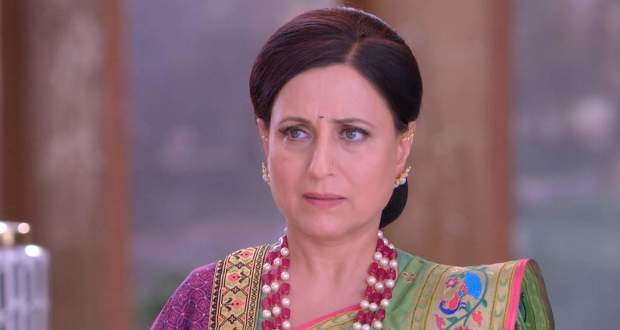 Today's Ghum Hai Kisi Ke Pyar Mein 3rd August 2022 episode starts with a time jump of six months where the family members are taking care of Sai who's seen walking with a bump.

However, Pakhi comes there and scolds Sai for joking about pregnancy while Sai says that she just wanted to experience pregnancy since the babyshower is being celebrated today.

The pillow falls which was used to make Sai's bump and everyone laughs recalling how Sai had gotten fake pregnancy symptoms and the pregnancy result came out negative.

Ladies start talking about labor pain and Pakhi gets scared but Virat and Sai calm her saying that the exercises she's been doing will help her during labor.

Further, Bhavani, Karishma, and Ashwini adore Pakhi in accessories and compliment her while Virat accessorizes Sai saying that it is her baby's baby shower.

Virat saves Sai from falling and tells her that even though she won't be giving birth to the baby, she will be the mother of their child Vinayak/Biyanka.

However, just before the couple can kiss, Ashwini interrupts them and compliments Sai stating that her face is glowing like that of a pregnant lady.

Later, everyone reaches downstairs and the ladies get shocked to see Sai dressed up for the baby shower.

Bhavani questions Sai while Virat answers that he dressed up Sai since it is Sai's baby.

Karishma comes that the baby will have two mothers but Sai once again states that she will be the baby's mother.

Hearing the guests compliment the glow on Sai's face, Pakhi gets upset and complains to her mother.

However, Pakhi's mother also firmly tells her that Virat will never let her keep the baby and points toward Sai and Virat who are having fun.

After some time, Sai and Virat go to take pictures while Pakhi is made to sit on the swing and complimented by the ladies of the families.

Virat gives a frame that is blank in the middle with Sai-Virat's picture on the sides to Sai as a gift and tells her that the space is for their baby.

Pakhi sees them and gets angry plotting a plan.

Afterward, the ritual to predict whether the baby will be a girl or a boy is done and Sai gets a daughter while Pakhi gets a boy.

Virat gets a call from the constable and leaves while Pakhi takes this opportunity to mock Sai saying that she is going to keep the baby and that Virat will be the one who will give her the baby himself.