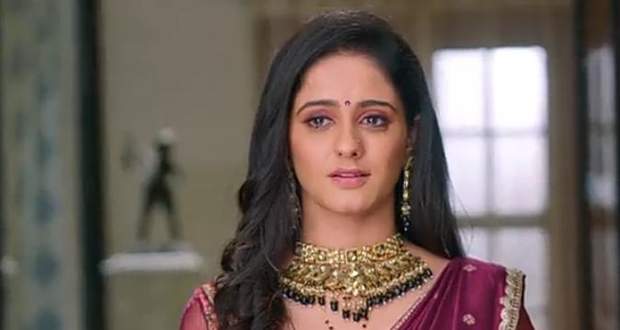 Today's Ghum Hai Kisi Ke Pyaar Mein (GHKKPM) 3 December 2021 episode starts with Bhavani saying that she will not do the Aarti and giving the plate to Sai.

Sai does Virat's aarti with shaky hands and recalls the moment when Kamal got shot and barely prevents the plate from falling.

Bhavani tells Sai to be courageous and Sai calms herself and completes the aarti with pride while Pakhi fumes in anger.

Sai tells Virat to promise that he'll return to her and he agrees while making her promise that she'll take care of herself.

He is leaving while Sai stops him and gives him a tiffin for the ride.

Further, she higs him emotionally and he returns the hug while Sonali taunts them but Ashwini silences her.

Later, everyone starts pooja and Sai is about to take the Aarti while Pakhi stops her and manipulates Bhavani saying that she doesn't want Sai to accidentally drop the plate and create a bad omen and let her and Samrat do the aarti.

Bhavani agrees and the pooja starts while Sai starts missing Virat and gets emotional.

Sai opens Virat's gift for her and gets happy while Virat also opens the tiffin and finds a letter by Sai in it.

She takes out Virat's letter from the bag and reads it while Virat also reads the letter and feels happy.

Virat shares the food with other officers while they talk about the internal war family members go through while they are on a mission.

© Copyright tellybest.com, 2020, 2021. All Rights Reserved. Unauthorized use and/or duplication of any material from tellybest.com without written permission is strictly prohibited.
Cached Saved on: Saturday 30th of July 2022 10:36:45 PMCached Disp on: Wednesday 17th of August 2022 04:44:48 PM