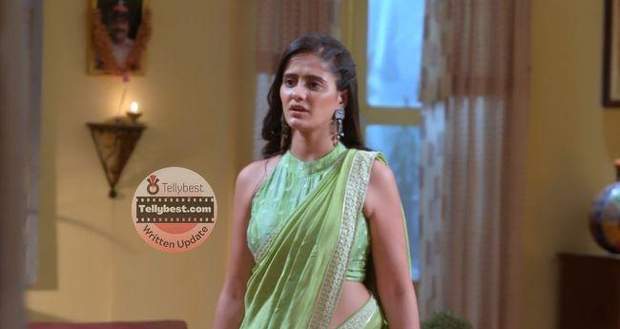 Patralekha taunts Virat for being cosy with Sai and tells him that she has come to pick up Vinayak too.

Later, school gets over and both the children come to them to describe their day.

After a while, Savi asks Virat if they can come with them while Vinayak tells them that their home is on its way and they can drop them off.

Later, Sonali tells Ashwini that Patralekha is not home while Karishma tells her that she has gone to Vinayak's school.

Ninad and Ashwini both look concerned while Sonali reminds them that Patralekha has to go because of Sai.

Bhavani tells everyone that Patralekha is right to fight for their relationship as it is not possible for a wife to share her husband with another.

Meanwhile, Virat asks the kids about their studies while they tell them about the group project they have been assigned.

At home, Savi invites Virat to come inside so that they can start working on the project.

Being awkward, Sai suggests making the project at their respective home but Vinayak tells her that it is a group project and they will have to do it together.

Despite Patralekha’s attempt to keep them apart, Vinayak and Savi convince Virat to work together at Sai’s home.

Patralekha tells Savi that they will come back after some time as Vinayak has to freshen up and rest.

At home, Ashwini comes to Vinayak’s room with refreshments and is surprised to see him in a hurry.

Vinayak looks excited about his group project and tells her that he is going to Savi’s house with Virat to do the project.

Ashwini tries to stop him from going there and suggests inviting Savi over.

However, Vinayak tells her that it was Virat’s idea to make the project at Savi’s home and that they will be leaving shortly.

Ninad overhears Vinayak’s conversation with Ashwini and realises that Virat is not able to keep the balance in keeping his life separate from Sai and decides to have a talk with him before things get out of his hand.

On the other hand, Patralekha questions Virat for agreeing with Savi while Virat tells her that he does not want to create chaos at home by inviting Sai home.

Patralekha taunts him for not having a problem working with Sai but is afraid to bring Sai home.

She calls Virat hypocritical and tells him that he talks about hating Sai but has no problem being nice to her at school.

Virat gets offended and asks her if she wants him to fight with Sai all the time just to make her happy.

Meanwhile, Patralekha tells him that this is not what she means but he should at least be concerned for her peace of mind.

Later, Virat tells her to look into his eyes and find out if he has any feelings for Sai and that Sai is just a colleague to him.

Just then Mohit come to Patralekha reminding her of the meeting that they have been postponing for days because of her.

Patralekha does not want to go but Virat tells her that she should not let the business get affected because of her personal issues.

Meanwhile, Usha is happy for Sai whose life is getting back on track while Sai thinks Patralekha’s possessiveness is increasing day by day.