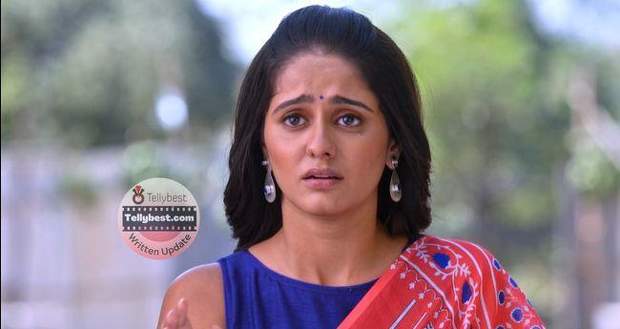 Virat gets worried for Patralekha and tells her to stay home and prepare lunch for Vinayak and he will bring Vinayak home.

Just then Sai is feeling suffocated, and Sahiba helps her with water.

Sai composes herself and finds Roohi on Pratap’s social media account and sends her a message about Pratap making children hostage and asking her to help her.

After a while, Sai scrolls more images from Pratap’s account and finds some mementoes which she asks Sahiba to make.

In the meantime, Mohit finds out about the kids kidnapping on the news channel and informs Patralekha about it.

Later, Virat arrives at the hospital and assures Sai that he will find a way to save "their" children.

Afterwards, Virat asks the senior doctor about any other entrance to the storage room and tells him that he will simplify every problem and will make the impossible possible to bring their children back.

On being asked, Virat tells Sai that Ruhi refused to help them and they are on their own.

As Virat prepares to climb the window to get to Pratap, Sahiba gets on work to preparing the memento and Sai goes to talk to Pratap to convince him to release the children.

On hearing Sai about trying to contact Ruhi, Pratap gets agitated and tells her to find a way to bring Ruhi here so that he can marry her.

In the meantime, Virat asks the senior doctor to cut the electric supply so that he can get into the room.

Meanwhile, Sai tries to explain Pratap Ruhi’s point of view saying Ruhi was suffering when she heard of his death and accepted the help of one person who was there to look after her and now when he is back he wants her to leave him and come back.

Pratap’s anger is not letting him see reason, and just then the power goes off.

Pratap gets angry and warns Sai to not try any smartness with him or else he will kill the children.

Sai tells him that no one is trying anything but Pratap does not believe her and calls Virat just before he is about to get inside.

Pratap tells Virat that he knew Virat’s tactics as he himself was a very good police officer and tells him to go back.

Virat feels frustrated at being caught and tells him that he is going back and not doing anything to the children.

Meanwhile, Patralekha arrives at the hospital with Ashwini and Mohit and tries to get in but gets hurt.

Pratap gets nostalgic to see the memento and assumes Ruhi to be outside the door.

Meanwhile, Virat also comes there wanting to get inside the door but Sai stops him saying Pratap will open the door anytime soon.

After a while, not getting any reply from Ruhi Pratap opens the door and Sai and Sahiba use the opportunity to get inside by pushing the door with force.

Afterwards, Virat jumps on Pratap and captures him while Sai and Sahiba put the children aside.

Seeing Virat ready to kill Pratap, Sai stops him and tells him that he is not a bad man just a man with a broken heart.

Pratap feels drained and asks Sai why she saved him as he has nothing to live.

© Copyright tellybest.com, 2022, 2023. All Rights Reserved. Unauthorized use and/or duplication of any material from tellybest.com without written permission is strictly prohibited.
Cached Saved on: Wednesday 25th of January 2023 04:26:11 PMCached Disp on: Sunday 5th of February 2023 04:36:25 AM