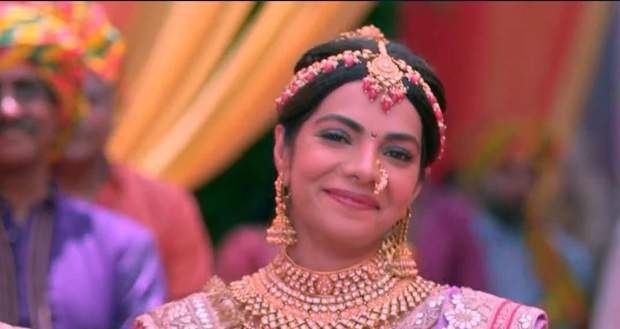 Today's Ghum Hai Kisi Ke Pyar Mein 3rd May 2022 episode starts with Sai telling Virat that she has fallen in love with him.

Sai also tell him that she loves him like mad and cannot think of living without him.

Virat looks at Sai lovingly while she admits the intensity of her love and says “I Love You”.

Everyone claps for them and tells them in a chorus that they already knew that.

Later Sai asks Virat whether he loves her or not.

Virat tells a simple no which makes Sai sad.

However, Virat tells her that he does not love her but loves her very very very much and not since today but for a long time.

Sai complains to him for not telling her earlier while Virat jokes about her not giving him any chance.

Sai and Virat hug each other while Patralekha cries at lost love.

Ashwini comes and blesses both Virat and Sai while Bhavani stays silent.

Rajeev and Shivani take the credit for bringing Sai and Virat together.

Virat bends down on his knees and tells her that he wants to get married to her again.

Sai’s happiness knows no bounds and she says yes and again hugs Virat.

Everyone showers them with flowers.

Just then Bhavani scolds them for taking marriage as a joke.

However, Sai tells her that she has already made preparations for her wedding today and has used the tradition of Samuhik Vivah.

Bhavani is silenced by everyone’s agreement.

Ashwini reminds everyone of the “mahurat” and asks them to hurry.

Shocking everyone present, Virat picks up Sai in her arms to carry her inside.

As the wedding rituals begin everyone looks happily at both the marrying couples while they are engrossed in each other.

SaiRat’s fans are happy for them while the rest looks at them enviously or sceptically.

Virat and Sai perform Shivani’s ‘Kanyadaan’ and later perform the ‘Pheras’ together.

Patralekha tells Bhavani that today's shameless debacle is just a beginning and soon Sai’s value in the house supersede Bhavani’s.

Bhavani stands in front of Sai and tells her that today she will show her what drama actually is.

© Copyright tellybest.com, 2020, 2021. All Rights Reserved. Unauthorized use and/or duplication of any material from tellybest.com without written permission is strictly prohibited.
Cached Saved on: Sunday 2nd of October 2022 04:45:37 AM