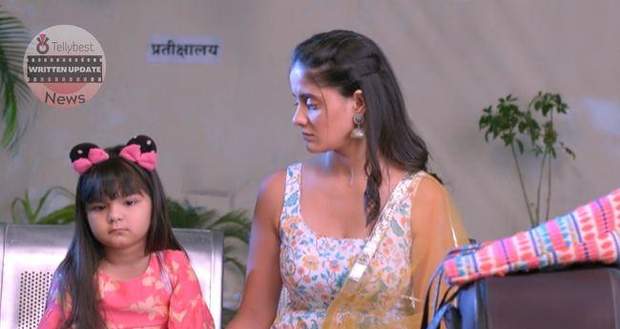 Feeling scared, Virat and Patralekha both ask Vinayak to get up and think of what Dr Dole had said.

However, Vinayak has given up hope and continues to stay down.

Just then, Sai’s voice is heard on the microphone.

Sai tells him that I can do, I am doing, I will be doing and I am done. These powerful words motivate Vinayak while Virat looks shocked to see Sai there dressed in the same t-shirt.

Virat complains to Patralekha but she tells him to say nothing and see how Sai’s presence is affecting Vinayak.

Meanwhile, Sai recites another motivational verse and tells Vinayak there is no shame in losing but in giving up.

Savi comes to Vinayak and helps him get up and reminds him of his promise.

Vinayak begins to run while Patralekha, Virat, Sai and Savi run alongside him cheering him and telling him that he can.

Soon Virat is running fast and his braces break and fall behind.

The Chavan's cheers Vinayak too and the organisers and judges watch them with smiles.

After a while, Vinayak reaches the end line and feels happy while Patralekha sits on his knees in gratitude.

Sai tells Vinayak that all these people are clapping for him because he was able to defeat his fear and has proven that he is a hero who faces all challenges with bravery.

Afterwards, the school announces the winners and gives them prizes.

As Chavans are about to leave, the announcer tells everyone that there is another winner who hasn’t been able to win the race but has won the heart of people and showed them that true determination can defeat the biggest of challenges.

She calls Vinayak a Wonder-boy and calls him on stage and asks the commissioner to give a medal to Vinayak.

Everyone claps for him and the announcer ask Vinayak to thank the people who have made it possible.

Vinayak tells everyone that his family has been a huge support to him and his doctor, Sai Joshi has helped him too.

Bhavani and Sonali do not like Vinayak giving credit to Sai.

Patralekha also agrees with Vinayak and gives the whole credit to Sai.

However, Virat gives credit to Vinayak and then to Patralekha who brought Sai to Nagpur and looked after him with everything she got.

Patralekha's eyes water at Virat's praises and she thanks Virat.

Meanwhile, Savi tells Sai that now that Vinayak has won her wish will come true.

Virat, Patralekha and Sai look at her puzzled while Vinayak tells him to wait for a while.

However, Sai thinks sadly seeing Vinayak and Savi say bye as she will be taking Savi back so that she can protect her from further hurt.

Before leaving, Sai tells Vinayak to remember this day and how he defeated his fears and became a winner.

© Copyright tellybest.com, 2022, 2023. All Rights Reserved. Unauthorized use and/or duplication of any material from tellybest.com without written permission is strictly prohibited.
Cached Saved on: Monday 21st of November 2022 01:17:48 AMCached Disp on: Thursday 1st of December 2022 02:48:57 AM