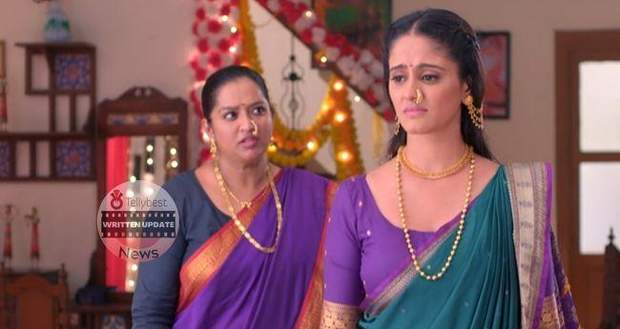 Today's Ghum Hai Kisi Ke Pyar Mein 3rd September 2022 episode starts with Patralekha telling Virat emotively to come back from the life he has chosen for himself.

After a while, she composes herself and tells him to get the uniform for Vinayak on his return from the office.

On the other hand, Usha scolds Sai for treating Savi so badly while she was not in the wrong.

Sai is equally hurt and tells her that she cannot hurt Savi more by telling her the truth that his father did not care for his mother enough.

Feeling her pain, Usha tells her that her complaint is justified but she needs to focus on her daughter now and decide things by keeping her in perspective.

Meanwhile, Ashwini comes to counsel Virat about the unjust way he is treating Patralekha despite his marriage.

Ashwini also tells him that his rude behaviour with Patralekha today has put a question mark on her upbringing.

She asked him to forget Sai and think of Patralekha.

Elsewhere Usha asks Sai what will she do when Savi faces her father and selects him over her.

Later, Ashwini tells Virat to go on the trip and leave Veenu in her care.

The next morning, Sai apologises to Savi for her behaviour in a very cute and dramatic way.

Afterwards, Savi promises Sai that she will never ask her about her father until he returns to them.

She tells her that her life has become a mockery where she is shown dreams and then those dreams get snatched away from her in the cruellest way.

However, Virat tells her about Ashwini counselling him about their relationship and in light of her arguments he is ready to go on a trip to try to work on this relationship.

On hearing about the trip, Vinayak also encourages them to go on a trip while he will take care of himself.

At the Chavan house, everyone becomes happy to hear Virat’s agreement to the trip.

On the other hand, a villager woman comes to call Sai to treat a woman in labour whose dai (one who delivers the child) is not able to help her.

However, Gulab Rao’s insinuations have hurt Sai’s reputation and the woman’s husband does not want her around.

Elsewhere, Vinayak’s doctor is very happy with Vinayak's progress and tells them to continue the treatment of the doctor who has treated him at the camp.

© Copyright tellybest.com, 2020, 2021. All Rights Reserved. Unauthorized use and/or duplication of any material from tellybest.com without written permission is strictly prohibited.
Cached Saved on: Saturday 1st of October 2022 09:14:39 PMCached Disp on: Wednesday 5th of October 2022 05:45:57 PM