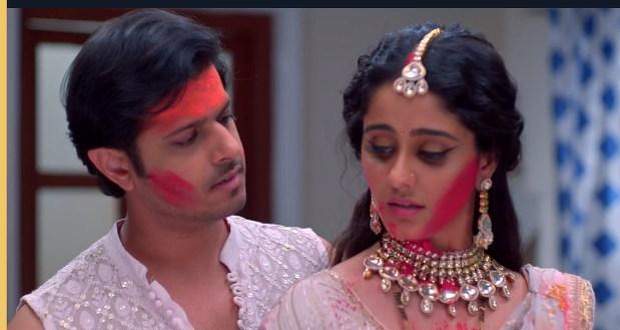 Just then Sai announces that she is the one who did it and had given it to Ashwini to feed Virat.

Meanwhile, Virat shames Sai for using Ashwini for her antics while Ashwini is disappointed in her.

On being accused by Patralekha, Sai reminds her how she had tried the same on her but failed.

Afterwards, Sai explains that her only intention behind adding  ‘Bhang’ in Virat’s food was to lighten up him a little so that he can enjoy Holi.

Mohit and Samat favour Sai and are grateful to her for giving them pleasant memories this Holi.

However, Patralekha does not like Samrat favouring Sai and calls him Sai’s disciple.

Seeing Samrat arguing for Sai does not impress Virat and he tells them that he does not like this manipulation.

Samrat questions Virat about his anger and difficulty in forgiving them.

Sai also tells Virat that in his heart even Virat wants to forgive them then why could he not try forgiving them on a day when his name is all cleared now and everyone knows his truth.

Virat calls himself dead for them and can never come back.

After a while, Patralekha asks Sai to stop her antics while Sai warns her to stay out of her and Virat's life otherwise she will have to face the consequences.

In his room, Virat calls DIG sir to ask for a transfer, whereas DIG tries to convince him to not take such a drastic step but Virat stays adamant.

Giving up, DIG tells him that he needs to get the fitness certificate first to rejoin the duty.

In the meantime, Ashwini comes crying to Bhavani and others and tells them about Virat’s decision.

On being questioned by Samrat, Virat reminds him of doing the same when he wanted to get away from them.

Later, Sai assures Ashwini that Virat will soon get back to his normal self.

However, Ashwini has had enough of Sai and scolds her for bringing Virat to this point where he is ready to leave them again.