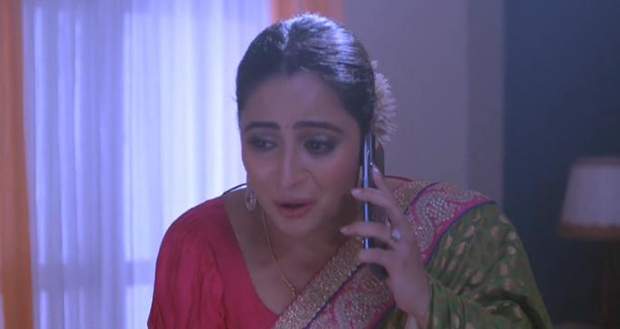 Today's Ghum Hai Kisi Ke Pyar Mein 4th August 2022 episode starts with Patralekha telling Sai that she will not give give this child back to her.

She also tells her that if she tries to tell it to others then she will tell them that she is lying.

Sai tells patralekha not to test her patience else she will do something very bad to her.

Patralekha mocks Sai and tells her that she will also name this child either Vilekh or Vilekha.

Sai warns Patralekha that she will have to give the child back to her else she knows very well that once she gets anything in her mind then she does it at all cost.

Patralekha shrugs and goes to dance with others happily.

At night, Sai is thinking about everything when Virat questions her for looking so lost.

Sai knows how Patralekha will prove her a liar and decides to keep Patralekha’s words to herself.

Sai tells Virat that she is waiting for the child to come out and after that, she will not let anyone take it away from her.

The next morning, Virat brings breakfast for Patralekha while she praises him for being an exemplary father.

Later, Virat talks to his child and tells him to become whatever he wants or he can be a doctor like his mother or a police officer like his father.

Patralekha cries telling saying after the delivery she will no more be the child’s mother.

Virat appeases her by saying she can play with him as much as she likes.

Just then, Bhavani tells Patralekha and Virat that she has organised a Bhoj for Samaj and they will all be going there.

She asks Virat to come early in the evening so that Patralekha doesn’t have to be alone.

After a while, all the family members have gone to distribute the Bhoj while Patralekha is enjoying being alone in the house and climbs stairs ignoring Sai's instructions.

After exploring Sai’s room, and dropping the frame with Sai and Virat’s photo in jealousy, she returns back.

However, her feet slip on the final stairs and her water break (means her labour pain starts).

Meanwhile, Virat is finishing his day to leave early when a constable tells him that roads are blocked due to heavy rain.

Just then Patralekha calls Virat telling him that her water is broken and she is in pain.

Virat leaves for the home after trying to contact Sai.