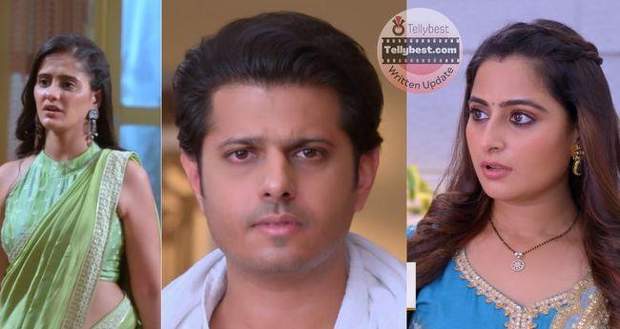 After a while, Virat and Vinayak arrive and Savi informs them about Pani Puri party.

Meanwhile, Sai also comes out and asks about Patralekha while Virat tells her that she has some work at the office.

Inside the house, Savi suggests to Sai that they should have a competition and cutely insists when Sai refuses.

Virat smiles remembering that Savi is similar to Sai in this regard.

He thinks of the time when Sai tricked him into eating Pani Puri at dinner by challenging him to a competition.

His smiling face turns sad thinking that the past is now only a memory while their relationship has taken a turn in the worst possible way.

After a while, they all get started and continue to do the competition.

Later, Sai's mouth burns with spices and Virat starts to cool her off and then stops realising his mistake.

Meanwhile, Virat wins and Virat and Savi start to cheer, “Baba Is The Best”, and Savi asks Sai to cheer too.

Sai tells Savi laughingly that Virat is not her Baba while Savi asks her then who is Virat to her.

Sai and Virat both look awkward for a while until Sai tells Savi that he is her colleague and will be Virat Sir for her.

Savi once again asks Sai to cheer for Virat and call him the best, however, Virat tells jokingly that Sai will never do it.

Sai has to say the word so that children do not get the wrong impression of her.

On the other hand, Patralekha is worried about Virat and Vinayak and looks at her phone again and again.

Patralekha is distracted and does not look at the file and suggests investing in the company.

Mohit looks astonished and rechecks with her that she has read the file so soon.

After a while, Mohit tells Patralekha to check the factory as well but Patralekha gets irritated and continues to look at the phone.

After a while, Patralekha calls Vinayak to get an update on the project when Vinayak tells her that they had a Pani Puri competition.

In the meantime, Bhavani asks for Virat and gets angry at Ashwini for giving too much freedom to Virat that he had forgotten the values and rules of the house.

She praises Patralekha for balancing work and home life so efficiently while sounding disappointed at Virat who has forgotten all rules for Sai who did not take a moment in forgetting him.

Meanwhile, Savi vomits on Virat as she is not feeling well. Savi feels sorry for spoiling his clothes but Virat tells her that it is ok for children to do that to their parents.

Meanwhile, Bhavani tells Ashwini to put a check on Virat when he is in the wrong instead of encouraging him.

She also warns Ashwini to save Virat now when there is time else he will forget who he is and ruin his life.

© Copyright tellybest.com, 2022, 2023. All Rights Reserved. Unauthorized use and/or duplication of any material from tellybest.com without written permission is strictly prohibited.
Cached Saved on: Wednesday 25th of January 2023 08:58:39 AMCached Disp on: Wednesday 1st of February 2023 05:03:03 PM