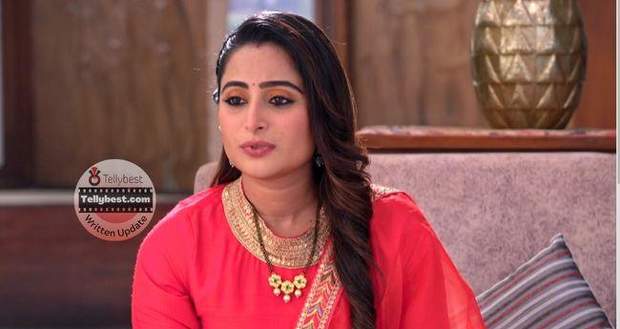 Today's Ghum Hai Kisi Ke Pyar Mein 4th January 2023 episode starts with Sai telling Pratap that she has also loved someone whom she got married to and circumstances separate them and then he got married to someone else.

However, she never tries to hurt him despite being hurt and love is like that. It should only be about giving and not hating.

Pratap apologises to Sai for trying to hurt her children.

Sai tells her the best way to get free is to forgive Ruhi and make her a beautiful memory of the past.

Later, Sai also joins in the group hug when Virat tells her that they have saved their Veenu.

Sai looks puzzled at the choice of words when Virat gets a call from Pulkit who tells him about Patralekha being in a hospital in serious condition.

Virat immediately leaves asking Sai to look after the children.

The next morning, at dawn time, Sahiba is taking Sai’s leave and tells her that the past two days seem magical when she found a very good friend.

Sai also tells Sahiba that she has become a part of life that has been sent for her so that she can come back on the right track.

Sahiba tells Sai that in the hospital she felt Virat and Sai were a part of a happy family with their children.

Sai tells her that perceptions can be deceptive.

Just then, a procession of Sikh devotees pass by them and Sahiba says to Sai that this might be a good indication.

Sahiba tells her that she still cannot believe that fate has taken away her child from her so cruelly.

She also suggests to Sai to find Vinayak who might be alive somewhere like she is after her accident.

After a while, Sahiba tells Sai to give her paintings to an orphanage where she had planned to go herself but couldn’t.

In the meantime, Sai is reliving Sahiba’s words about finding Vinayak when she gets a call from Pulkit who wants her at the hospital.

At the hospital, Virat asks about the children while Sai tells them that Vinayak was a bit restless and asking for his mother but is now sleeping.

Meanwhile, Pulkit comes out of the ICU and tells Sai that Patralekha’s condition is deteriorating and they will need to operate again on her to save her life.

Pulkit asks Sai to assist him as she is aware of her medical history and nuances because she had operated on Patralekha the first time.

Later, Pulkit and Sai need Virat’s permission to remove Patralekha’s uterus to save her life.

Hearing Pulkit, Bhavani gets angry at him for thinking of removing the Uterus.

She tells him that Patralekha has yet to give her family an heir and if they will remove the Uterus then how will she become a mother?

Pulkit gets frustrated and tells Bhavani that if they do not remove the uterus then Patralekha will die.

Bhavani refuses to accept the truth and turns her anger towards Sai and why is she operating on Patralekha.

Pulkit defends Sai and tells Bhavani that he is in charge of this surgery and will choose his team as he sees fit.

Bhavani tells Pulkit that instead of blaming them for not taking care of Patralekha, he should consider Sai’s hand in not doing the surgery well.

Sai becomes angry to hear Bhavani and accuses her of sending Patralekha on honeymoon in her condition to get her wish uncaring for her well-being.

Seeing Sai and Bhavani argue, Virat shuts them down and tells Pulkit to go ahead with the operation.

© Copyright tellybest.com, 2022, 2023. All Rights Reserved. Unauthorized use and/or duplication of any material from tellybest.com without written permission is strictly prohibited.
Cached Saved on: Wednesday 25th of January 2023 09:05:16 AMCached Disp on: Thursday 9th of February 2023 04:38:21 AM