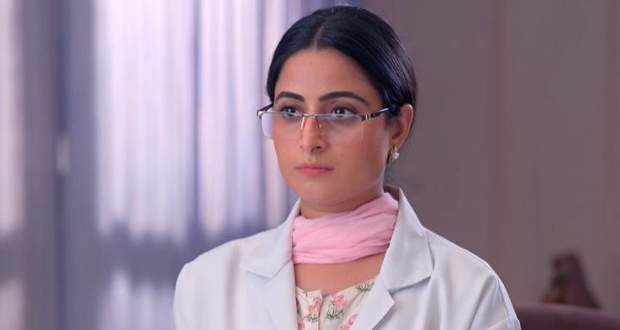 Meanwhile, Sai lies unconscious on the concrete floor while bleeding from the head.

However, Virat calls one of the police officers and tells him to track Sai's location while the doctor calls for him.

Meanwhile, Sai regains consciousness and gets worried seeing that her purse and phone are both missing.

Sai realizes that her head is injured and rips her saree to tie a piece to her injury while planning to go to Geeta's house.

Back at the hospital, Virat gets frustrated and informs Bhavani and Pakhi that the doctor won't take another lady as a surrogate at the last moment.

However, Pakhi encourages him and tells him to not wait for Geeta or Sai and make a decision as he only has 20 minutes.

Sai reaches Geeta's house and shouts for her to open the door while Yogesh stops Geeta from talking to Sai.

Meanwhile, Pakhi tries to emotionally blackmail Virat so that he agrees to let her become the surrogate for his child.

Virat calls Sai but it is still switched off after which he decides to go look for Sai himself.

Back at Geeta's house, Sai manages to get them to open the door and requests them to come to the hospital for the process.

At the hospital, Virat tries to talk to the doctor while Bhavani lies about Geeta's identity and sends Pakhi for the procedure.

Geeta and Yogesh reveal to Sai about the dangers they have heard while Sai tries to convince them that the procedure is safe and hear her out once.

Pakhi gets ready for the procedure while Virat learns that Sai's phone got stolen and the last location was near Geeta's house.

Virat gets worried and tells Bhavani that he is going to find Sai.

© Copyright tellybest.com, 2022, 2023. All Rights Reserved. Unauthorized use and/or duplication of any material from tellybest.com without written permission is strictly prohibited.
Cached Saved on: Tuesday 22nd of November 2022 07:35:08 PMCached Disp on: Saturday 3rd of December 2022 03:33:21 PM