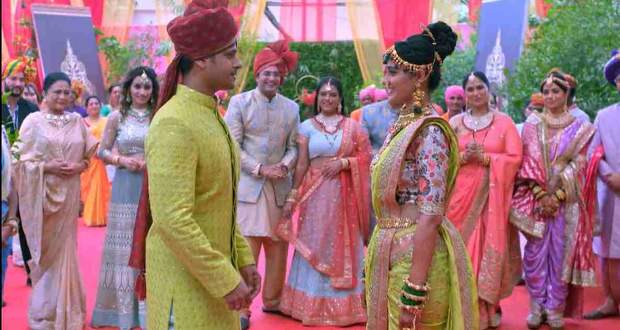 Today's Ghum Hai Kisi Ke Pyar Mein 4th May 2022 episode starts with Patralekha instigating Bhavani by telling her that her authority is being undermined by Sai’s willfulness.

However, Karishma tells them that the matter is out of Bhavani’s hands as Virat and Sai are already married.

Bhavani feels challenged by Karishma’s statement and tells them that she can and will stop them from getting married.

Bhavani goes and stands on Sai’s path while Sai looks at her questioningly.

On being asked by Virat, Bhavani tells them that before they take the seventh ‘Phera’ she has one condition.

Afterwards, Bhavani tells Sai that she has two options either to become a doctor or marry Virat and become a proper daughter-in-law of the Chavan family and let go of her dream of becoming a doctor.

Sai is shocked at Bhavani’s conditions and objects to its unfairness.

Bhavani reminds Sai of her deal with Virat that is over and so she should leave.

Devi speaks in favour of Sai but Bhavani shuts her down and tells her to not interfere in the family business.

Virat tells Bhavani that despite being the head of the family she has no right to put such conditions on Sai.

Bhavani remains adamant in her demand and tells Sai that she has to behave like a proper daughter-in-law.

Sai defends herself by saying she performs all the duties of the house before going to college and will continue to do so.

Bhavani brings out the old adage ways of the daughter-in-law's role in society and tells her that from now on she also has to do it.

Bhavani thinks that Sai is incapable of balancing both house and work and therefore should choose one.

Bhavani also comments on Sai for keeping her paternal name to which Sai tells her that she has decided to change her name.