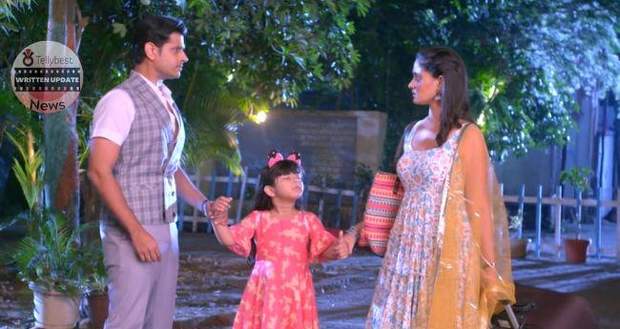 Today's Ghum Hai Kisi Ke Pyar Mein 4th November 2022 episode starts with Sai telling Vinayak that she is proud of him and asks him to always remember this day and how he won despite the hardships.

Sonali gossips with Bhavani about Sai leaving the town while Bhavani tells her that Patralekha has sent the tickets to Sai and they are leaving today only.

Later, Virat thanks Savi for being a great support for Vinayak and apologises to Savi for not giving her an answer yet about her question.

Patralekha expresses her gratitude to Sai for bringing happiness to Vinayak’s life.

Virat also realises the truth and thanks Sai for making Vinayak brave enough to overcome fear.

Meanwhile, Vinayak tells Savi that he will talk to Virat about adoption and then they will be brother and sister.

At the same time, Sai tells them that she did everything for Vinayak and they are lucky to have him.

She also tells them that her job is finished today and hopefully they will not cross paths in future.

Patralekha hugs Sai before she leaves.

Meanwhile, Savi tells Vinayak not to worry and take his time.

Bhavani criticises Patralekha for hugging Sai but Ashwini tells her it is the mother who is thanking Sai not a wife.

Later, Vinayak goes to his bully classmates who look scared of him and tells him not to complain to the Principal.

However, Vinayak thanks them for their comments which challenged him to become better.

Later, all the kids resolve their differences and become friends.

Meanwhile, Jagthap is standing high on the trolley in a drunken state ready to jump from there and threatens Vitthal into promising to never create problems for Sai in future.

Vitthal promises to say nothing in future to Savi and Sai.

Later, Virat, Vinayak and Patralekha come home with a wonderful welcome from all his family members.

After a while, Bhavani tells them that they are all going to Ashtvinayak to fulfil their Mannat and they are going there and leaving Patralekha and Virat alone so they can work on making another child.

Virat and Patralekha feel awkward at the suggestion and go away.

Meanwhile, Jagthap tells Vitthal that he is a changed man now due to love. He now does not believe in snatching from people but working to earn it and from now on they will not do anything bad to anyone.

After a while, Jagthap tells him that he was only pretending to be drunk because he knows how much he loves him and will definitely give in to his demands.

Later, Vitthal and Jagthap talk happily with each other when Jagthap gets a call.

Meanwhile, Sai and Savi are talking about Vinayak and how happy he is when Usha calls her and tells her to tell Virat about Savi and not keep Virat and Savi apart.

Meanwhile, Sai cut off the call and tells her Aaba (Sai's father) that she will have to bring up Savi all on her own just as he has raised her.

© Copyright tellybest.com, 2022, 2023. All Rights Reserved. Unauthorized use and/or duplication of any material from tellybest.com without written permission is strictly prohibited.
Cached Saved on: Monday 21st of November 2022 05:44:04 AMCached Disp on: Thursday 1st of December 2022 01:12:36 AM